The Mechanical Mind of John Coggin 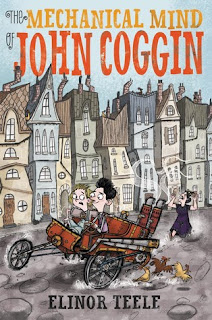 Title: The Mechanical Mind of John Coggin
Author: Elinor Teele
Publisher: Walden Pond Press
Publication Date: April 12th, 2016
Genre/Format: Fiction/Novel
GoodReads Summary: A quirky, humorous, whimsical, and heartwarming middle grade debut about a young boy who runs away from home with his sister to escape working in the family coffin business—and discovers even more adventure than he bargained for.
John Coggin is no ordinary boy. He is devising an invention that nobody has ever seen before, something that just might change the world, or at least make life a little bit better for him and his litter sister, Page. But that’s only when he can sneak a break from his loathsome job: building coffins for the family business under the beady gaze of his cruel great-aunt Beauregard. Having lost their parents when Page was a baby, how else are they supposed to survive?Perhaps by taking an enormous risk—a risk that arrives in the form of a red-haired scamp named Boz. When Great-Aunt Beauregard informs John that she’s going to make him a permanent partner in Coggin Family Coffins—and train Page to be an undertaker—John and Page sign on with Boz and hit the road. Before long, they’ve fallen in with a host of colorful characters, all of whom, like John and Page, are in search of a place they can call home. But home, they realize, isn’t something you find so much as something you fight for, and John soon realizes that he and Page are in for the fight of their lives. Elinor Teele’s picaresque debut is a rollicking tale filled with wild adventures, daring escapes, and—thanks to Boz—more than a little catastrophe.
What I Think: I'm a huge Roald Dahl fan. I love his stories - the gentle characters, their usually crummy circumstances and how they get through it all with a little help from their friends who see the good in them. When I say that The Mechanical Mind of John Coggin reminds me of Roald Dahl's stories it's definitely a major compliment. I was immediately sucked into this book, worried about John and his sister and hoping they would figure out how to stand up to their Great-Aunt Beauregard...but I had no idea the adventure I would get to go on with them.
As a mentor text, the description is amazing! I love it. All of it. The characters come to life. There are so many characters! And yet you get a true sense of each of them. The more I write, the more I marvel at how authors take a character and bring them to life for readers. Even supporting characters can be so full of life. It's still amazing to me and I'm always looking at examples of how to do this. If you or your students are looking at characters and how to bring them to life, read this book as a mentor text!
Read Together: Grades 3 - 6
Read Alone: Grades 4 - 7
Read With: Matilda by Roald Dahl, Circus Mirandus by Cassie Beasley, Flora and Ulysses by Kate DiCamillo
Snatch of Text:
"Pludgett was where the Coggins had always lived - a grim, grimy respectable city on the edge of a grim, grimy, respectable bay." (p. 5)

"Life would have been a lot easier for John if he were dumb. Unluckily for him, he was cursed with imagination. He was always coming up with incredible creations - Bicycle plows! Amphibious velocipedes! Spaceships that slingshotted around the sun! - anything that would free him from the deadening sight of plank after plank." (p. 9)

"'Building a story is like any other invention, John my lad,' he would say. 'Guts and gung-ho at the beginning, struggles and surprises in the middle, and the glorious moment when everything comes right.'" (p. 11)
Writing Prompts: Write about a time in your life when you had to stand up for something you really wanted in your life even though it wasn't what others knew you wanted or needed.
Topics Covered: Family, Friendship, Loyalty, Kindness, Determination, Hope, Imagination, Curiosity

*Thanks to Walden Pond Press for
a copy of The Mechanical Mind of John Coggin in exchange for an honest review**
Posted by Jen Vincent at April 01, 2016