As a mom to two boys, I know more about wrestling than I ever wanted to or thought I would. Honestly, I can tell you about John Cena and Roman Reigns, Sin Cara and Kalisto, The Miz and The New Day.  There's just no avoiding it in my house.

But knowing that my kids are such wrestling fans, I know they are going to like Tito the Bonecrusher by Melissa Thomson. You might know Melissa from her Keena Ford chapter book series. I love Keena and her antics but I'm excited to read Melissa's first middle grade novel. Here's the summary from GoodReads:

"Oliver "Spaghetti-O" Rodriguez's dad is about to be deported to Mexico, and Oliver believes the only way to save him is with the help of his favorite lucha-libre wrestler turned action star, Tito the Bonecrusher. Together with his best friend Brianna (a.k.a. "Brain"), and their new ally Paul "Popcorn" Robards, Oliver devises a madcap plan to spring his dad from a Florida detention center. Heartwarming and hilarious, this book looks at what it takes to be a hero...and what happens when you realize that saving the day might not always be possible."

Doesn't it sound so fun but also intriguing? I'm excited! And I'm excited for you to see the cover! 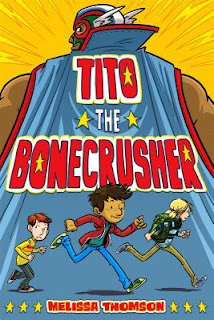 Open up your GoodReads!
Tito the Bonecrusher comes out next year on April 25th, 2017
from Farrar, Straus and Giroux.

And until then, be sure to follow Melissa on social media.
Visit Melissa's websiteTwitterFacebookInstagram.
Posted by Jen Vincent at April 21, 2016