Today I'm overjoyed to have Kristina Springer here to talk about how she used mentor texts when writing Cici Reno: #MiddleSchoolMatchmaker. I hope you enjoy learning more about her process! 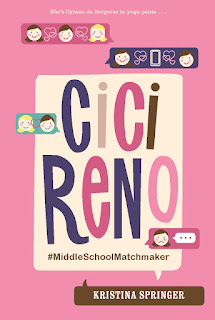 Using Mentor Texts for Cici Reno #MiddleSchoolMatchmaker
A Guest Post From Kristina Springer
Middle school is a test, but Cici Reno has all the answers. She's the go-to girl for advice. She's cool, she's funny, and she's enlightened (thanks to yoga classes at her mom's studio). So when her pretty BFF, Aggie, is too shy to speak to the boy she's crushing on, Cici goes online and does the talking for her. The only problem is, Cici starts to fall for the guy herself! For the first time in her life. she doesn't have a clue.

When I pitched this book to my agent (and then later editor) I told them it was based on a loose retelling of Cyrano de Bergerac and that it was a humorous tale of a 7th grade girl who thinks she has the answers to everything, but finds when it comes to love, she really knows nothing at all
On the cover of Cici Reno #MiddleSchooMatchmaker it says across the top, “She’s Cyrano de Bergerac in yoga pants.” So you probably can guess that a major mentor text I used for writing this book was the famous Cyrano de Bergerac play. Before I did any real writing I began by doing some research. I went online and found a copy of the original play written in 1897 by Edmond Rostand. I then searched for various adaptions of the play from over the years and there has been many. I even came across a Snagglepuss cartoon that adapted the Cyrano story. One particular version I looked at was the 1987 Steve Martin movie adaption Roxanne because I remembered watching it as a child and thinking it was funny. I knew with my book that I not only wanted it set in middle school but I wanted there to be a gender reversal in the characters: I wanted Cici Reno to be the Cyrano character, Aggie be the Christian character, and Drew to be the Roseanne character. So I also looked at 1997 adaption, The Truth about Cats and Dogs because in that film the smooth-talking Cyrano character was a female.
Another text I re-read while prepping for writing this book was Lauran Myracle’s TTYL series. The series is told entirely in text and instant messages and since I knew I wanted to include direct messaging between Cici and Drew in my book, I re-read Lauren’s book to see how she handled that sort of thing. I adore Lauren Myracle and she has been one of my favorite authors from her first book. I’m such a Lauren Myracle fan girl that I even went to one of her book signings on my due date when I was pregnant with my last child! Here’s a pic of me at the signing (from left to right: Sarah Mlynowski, me, Lauren Myracle, and E. Lockhart). 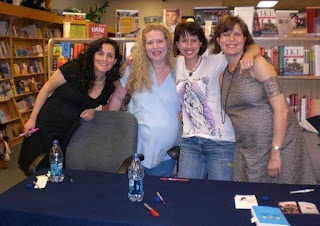 and at www.kristinaspringer.com
Posted by Jen Vincent at April 22, 2016

Email ThisBlogThis!Share to TwitterShare to FacebookShare to Pinterest
Labels: For The Love Of Mentor Texts, Guest Post