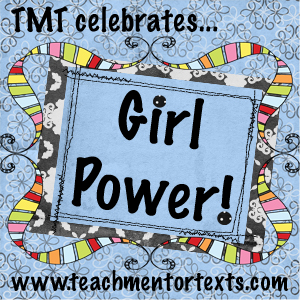 We are having such a blast with our Girl Power series! It's been great to hear from Maria Selke, Kirby Larson and Jenni Holm already! Jen is watching American Idol this year and is so proud to see that the top five finalists are ALL girls! It's been more than a few seasons since a girl won American Idol and there's not doubt now that it will happen again this year.

It's a such a great time to be talking about girl power! Today we bring you Kristin Levine, author of Lions of Little Rock and her thoughts on strong female characters in children's/young adult literature.


TMT: Why do you think it's important to write about strong girl characters?

Kristin Levine: When I was a little girl, I was a huge Star Wars fan.  But when I acted it out with my friends (mostly boys), we always argued about which character I was going to play.  I was the girl, they said, so I should be Princess Leia. But she only gets to be rescued and watch in concern as others blow up the Death Star.  Boring.
I always wanted to be Luke Skywalker, get a lightsaber, plan a daring rescue and fly an X-wing.  I guess I think it is important to write about strong girl characters, so that other young kids don't have to have that argument.

TMT: Describe a memory from your childhood when you felt empowered.

Kristin Levine: The summer after I graduated from high school, my parents let me and two girls from school borrow their car and drive across the United States for five weeks.  Sure, a few things went wrong.  We broke down in the Rockies and had to call a tow truck.  Everything we owned got wet in a rainstorm in Yosemite.  But we had a great time and gained so much confidence.  I have always been grateful that my parents trusted us to go on that trip. They did insist we bring along a "car phone."  The year was 1992 and it was about the size of a suitcase.

TMT: Did you have a female literary character you look up to?  (now or when you were growing up...)

Kristin Levine: A few of my favorites:
The Blue Sword and The Hero and the Crown by Robin McKinley - I read and reread these fairytale-like adventures about heroines who were anything but boring.
The Tombs of Atuan by Ursala K. Le Guin - The second in the Earthsea series is one of my favorite books.  It's a about a girl who is quite passive at the beginning of the story, and how she slowly learns to reclaim and use her own power.
Sabriel by Garth Nix - A super-exciting action heroine with one of the coolest weapons ever - a bandolier of bells.  Also great as a book on tape.
Finally, I've always had a fondness for Anne of Green Gables too, probably because we once visited her house on Prince Edwards Island.

TMT: What message do you hope to send to girls when you write strong girl characters?

Kristin Levine: I guess I mainly write strong girl characters for myself, because it's what I would have liked to have read when I was young.  And it's still kind of for me, because no matter how old we are, I think learning to stand up for yourself and those around you, being brave enough to speak out and use your own power, is not a lesson we learn once.  It's something we have to learn again and again, in different situations, throughout our lives.

Not sure how many interviews can say they include Star Wars, suitcase-sized car phones and Anne of Green Gables! Many thanks to Kristin Levine for stopping by to share her take on girl power!