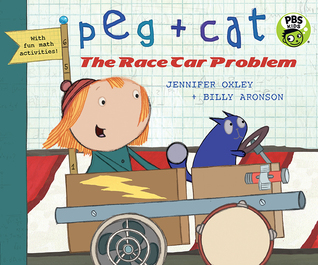 Peg and Cat have built an amazing car out of things they found lying around. They’ve named her Hot Buttered Lightning (since she’s built for speed), and they plan to win the Tallapegga Twenty. If they can make it out of the junkyard, that is. It’s a good thing Peg knows the best shape to use to make wheels and how to count laps to see who is ahead. And it’s lucky that Cat reminds Peg to keep calm when she’stotally freaking out! Will Peg and Cat be the first to complete twenty laps and win the Golden Cup? Or will it be one of their quirky competitors? Count on Peg and Cat to rev up young problem-solvers for an exciting race to the finish.
What I Think: I'm fascinated by brain research and what it tells us. It's no secret that I'm a fan of the growth mindset but I'm also keen on problem solving. The brain loves to solve problems. For instance, if I suggest you solve the problem 5 + 5...you can't help but think 10 in your head! Your brain just can't hold itself back, it wants to think of the answer. Taking this into account when designing lessons makes learning much more engaging. Giving students the ownership to brainstorm, research, try and try again is powerful.
Peg + Cat: The Race Car Problem is an example of what might happen when we give kids the opportunity to come up with their own creation and see how it works. Last winter, my family had a blast creating our own cardboard games after watching Caine's Arcade. This book could be a great mentor text to discuss how to hang onto the growth mindset and persevere when creating - whether it's a race car or another type of creation - and this aligns well with the CCSS Standards for Mathematical Practice...in case you address these in your district/classroom. Reading The Race Car Problem and other texts about creating, tinkering, experimenting (see below) would be a great opportunity to build students' background knowledge about the mindset of a maker.
There is a lot of mention of various shapes in this book. You could read and ask students to recognize shapes as the story goes on. The characters in this book are so fun and looking closely at the dialogue gives readers an opportunity to see how the characters' personalities come to life with the words they use. Overall, there are some really great words that can be pulled out as vocabulary words as well.
Read Together: Grades K - 3
Read Alone: Grades 1 - 3
Read With: Going Places by Peter H. Reynolds and Paul A. Reynolds, What Do You Do With An Idea? by Kobi Yamada with illustrations by Mae Bosom, The Most Magnificent Thing by Ashley Spires
Snatch of Text:

"They called it Hot-Buttered Lightning,
because they hoped it would be as swift as a bolt of lightning.
(They added 'hot-buttered' to make the name even better,
the way butter makes popcorn even better.)"
Writing Prompts: Write about a time in your life when you made something using your imagination. Did it go how you planned? Or did you have to try again after your first attempt? What helped you believe you should try again to make your idea better?
Topics Covered: Friendship, Ingenuity, Determination, Integration - Math