After driving past Modern Age Comics in Elgin, Illinois every morning on my way to work, I knew I had to stop in there. Finally, one day, I dragged a colleague there to see what was inside. I should probably add this as a step to checking out comic book stores: take a friend with you! I find it's so much easier to take any move towards discomfort when you have a friend to do it with you...or at least cheerlead you along the way.

I convinced my friend to come with me and off we went into Modern Age Comics. This was definitely one of the cleaner stores I have been in and also one of the smaller stores. But guess what? This store gets an A+ for its totally knowledgeable owner, Jesse Buck. He has a whole little section devoted to kids' comics and he helped my friend pick out comics for her three kids by asking questions about what her kids liked in TV shows or books and what their reading level was and how she felt about how graphic the images were. I was totally impressed (it might have something to do with his librarian wife...go librarians!). 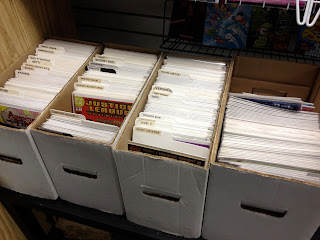 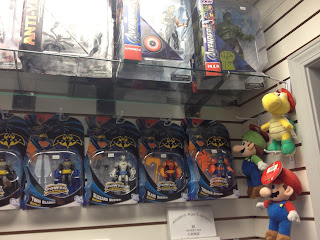 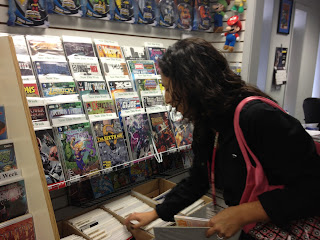 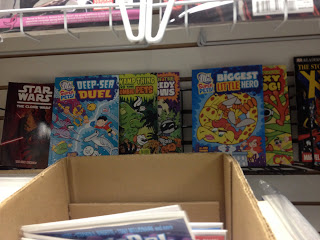 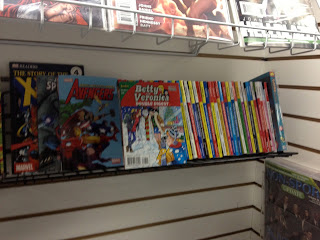 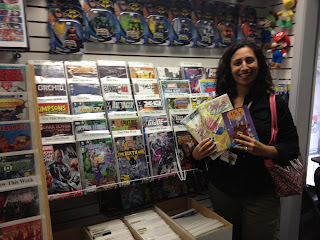 It's a little hard to see in the pictures but I got an Adventure Time, a Star Wars graphic novel and another comic I can't quite remember...(I so should have blogged about this sooner. *Note to self*)

Last weekend we ventured down to Chicago for Star Wars day at Challengers Comics + Conversation. Dave had promised me that Challengers would be the best kid-friendly comics experience in Chicago (maybe not in those exact words...). We have a love of all things Star Wars so I easily convinced the family to come with me. It helped that members of the 501st Legion - Midwest Garrison and the Rebel Alliance would be there. It was fun and there was food. I was really impressed by the store. They had a section of wall for kids' comics and also two bookshelves with graphic novels for kids. They also had two little comfy chairs to sit in that we totally took advantage of at one point. I'm super excited to have visited Challengers and one of the owners, Patrick, who tweets for Challengers at @gochallengersgo, has shared that they are going to have a super special section devoted kids that debuts this week. Love it! We're excited to go back. 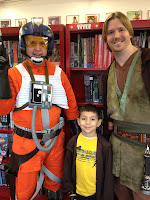 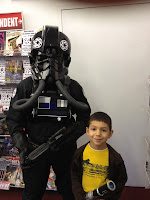 These are the comics we took home with us. Little Bean was super excited about Monsters, Inc. and we have read and reread the Sonic Universe comic at least every night. It has a bunch of other characters in it, including a comic version of Danica Patrick who grew up in Rockford where my husband grew up. And, of course, the new Star Wars that the whole party was even about. 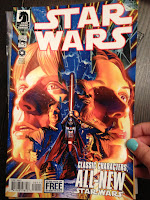 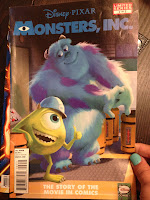 Comic Book Finds #4
This week I really felt so proud of myself! I had seen Archie comics when we were at Challengers but as I tried to corral our two-year-old and prevent him from touching and pulling every comic off the shelf my husband paid for the comics and I didn't have a chance to grab on off the shelf and tell him I just had to have it. Which meant I've been thinking about how much I loved the Archie comics when i was a kid and how much I so want to read one again...and then I found myself asking, "Why not?"

Thursday night on my way home from work I made a quick stop at Modern Age Comics. The parking lot was kind of dark and I was the third car to join the lot so it was a little freaky but I had been there before and knew exactly what I was going in for so I wasn't scared. Jesse was there and remembered me, going as far to even ask where my sidekick was. I admitted that all I wanted was an Archie comic for myself and he had just the right thing for me, Archie: The Married Life. How perfect is that?! I understood that after enough comic books in a series are printed that they combine them all into a graphic novel form, and there sat Book One of The Married Life. I flipped it over, $19.99...a bit more than the $3.99 I was expecting to pay but it was a whole two-inch-thick book of Archie (!!!!) so I went for it. And I don't regret it one bit (and neither does my 12-year-old inner self). 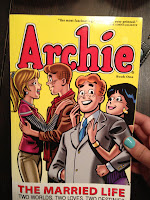 I know Kellee has visiting comic book stores in Orlando on her Un-Boring List and I count Challengers as visiting an indie book store which is on my list...it's local at least. What are your favorite stores? Which comic do you stop for because you can't stop thinking of it and just need to have it in your hands? Or, if you are leaning into discomfort visiting a comic book store, tell me about it!