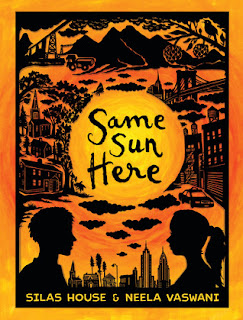 Title: Same Sun Here
Authors: Silas House and Neela Vaswani
Publisher: Candlewick Press
Publication Date: February 14, 2012
Genre/Format: Realistic Fiction/Novel-Epistolary
GoodReads Summary: Meena and River have a lot in common: fathers forced to work away from home to make ends meet, grandmothers who mean the world to them, and faithful dogs. But Meena is an Indian immigrant girl living in New York City’s Chinatown, while River is a Kentucky coal miner’s son. As Meena’s family studies for citizenship exams and River's town faces devastating mountaintop removal, this unlikely pair become pen pals, sharing thoughts and, as their camaraderie deepens, discovering common ground in their disparate experiences. With honesty and humor, Meena and River bridge the miles between them, creating a friendship that inspires bravery and defeats cultural misconceptions. Narrated in two voices, each voice distinctly articulated by a separate gifted author, this chronicle of two lives powerfully conveys the great value of being and having a friend and the joys of opening our lives to others who live beneath the same sun.
What I Think:  It has only been a couple of weeks since I reviewed Eli the Good by Silas House and I raved about it. It is a great book. I was excited to get an ARC for Same Sun Here from Candlewick at NCTE in the fall. Silas House co-wrote Same Sun Here with Neela Vaswani. House and Vaswani both do a wonderful job of bringing their characters to life. Each of their characters has a distinct voice.

The idea of pen pals has always been exciting and fun for me. In Same Sun Here, River and Meena are matched up as pen pals. While they have the option to communicate through e-mail, they both decide they would rather write real letters to each other. When I talked to my students about this book, most of them didn’t know what the term “pen pals” even meant. This surprised me but I guess it shouldn’t be that surprising. What it definitely is, is sad. I love getting mail and used to hope someone would send me a letter. I wonder if kids get mail less now than when I was growing up. I know people in general send less mail so I’m guessing kids don’t get as much mail as when I was growing up. Even thinking of my own kids, when my parents go out of town we Skype with them to keep in touch or talk on the phone rather than them sending letters or postcards to my kids. I love this book for its story of friendship but also for it's example of how important the written word is. Writing lasts and it seems like people are honest when they write and then vulnerable when they allow others to read what they have written. My students and I talk about books every day but we also write about books and it's exciting to converse through writing.

I am excited to use this book to talk with kids more about writing letters to each other and how a message changes once it has been written down. Did you know there is a name for books that are a collection of letters or other documents? They are epistolaries. Talk about a great word you can tell kids  most people probably don't know. This book is a great mentor text to celebrate writing in general!
Read Together: Grades 4 - 6
Read Alone: Grades 4 - 12
Read With: Regarding the Fountain by Kate Klise, Charlotte's Web by E.B. White, P.S. Longer Letter Later by Paula Danzinger and Ann M. Martin, Eli the Good by Silas House
Snatch of Text:

“I wonder what you look like. I am short and skinny. This is a good thing for squeezing on the subway. But I would rather be like Kiku’s secret girlfriend, Ana Maria, who is so pretty she stops traffic. I do think my hair is nice. It is long and black like Ana Maria’s, but hers is curly and mine is straight.” -Meena, p. 3

“You said your brother was your favorite human. Well, mine is Mamaw. Almost every day we climb the path up the mountain and she tells me the names of all the tress, or we go along very quiet and watch the ground for treasures. We have a nature collection that has things in it like feathers from blue jays and redbirds, chips of quartz, buckeyes, acorns, hickory nuts, and lots more. My other favorite thing to do with her is when we go fishing together in Lost Creek, which is full of bluegill (my father and I used to go fishing all the time, before he left). Mamaw and I clean them together and then she dips them in milk, and then meal and flour, and fries them. They’re delicious. Mamaw is the best cook in the world. This evening she is making my favorite meal: pork shops, biscuit and gravy, fried potatoes, and fried apples. I can’t wait. What’s your favorite meal? I guess my second favorite meal is fish, hush puppies, and fried potatoes….
I’m weird I guess. I mean, none of my friends really wants to spend that much time with their grandmothers. Or at least they don’t admit it. Mamaw says it is all right to be weird and that if the end of the world came I’d know how to survive, and the rest of the people my age would only sit in front of their dead computers and not know what to do.” -River, p. 14-15
Mentor Text For: Writing, Letter Writing, Personal Narrative
Writing Prompts: Write a letter to thank someone who did something for you that meant a lot to you. Reflect on what you wrote and if you would be more likely to share it with them verbally or through writing. How does writing it down change how you are able to express yourself?
Topics Covered: Friendship, Family, Love, Writing, Honesty, Siblings, Integrity, Immigration, Integration-Social Studies-Culture, Integration-Science-Coal Mining, Activism,  Determination