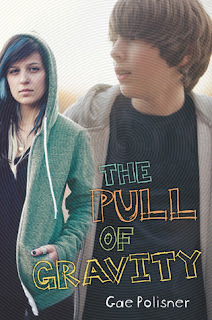 This month was Colby's turn to choose a book and he picked The Pull of Gravity by Gae Polisner, a wonderful YA Nerdy winner, in fact. I think he picked a great book to ease his way into reading more YA. I don't really think reading great books in YA will be that different for him from reading his great MG books. We'll see! Here's part 1 of our discussion for this month - we went thematic this time!

JEN: I was just about to start reading The Pull of Gravity when you asked me if we could read it for our I-94 Read Along so it was perfect timing. We both cruised through this book. When it first started I thought it was going to be tricky keeping track of all of the characters, but it didn’t take very long to get the characters straight. You had the suggestion to talk about themes throughout the book. I’m thinking we’re going to have major spoilers because we’re going to be talking about things that occurred throughout the entire book this way. Which is fine - but SPOILER ALERT! I love doing that. Everyone awake?

COLBY: I’ve decided that only want to read great books from now on. I wish it were it were that easy. I picked The Pull of Gravity (TPoG) for 3 reasons: my friends on Goodreads have given it glowing reviews, it won a Nerdy, and Gae is super nice on Twitter. I find myself wanting to read the books of authors that are cool on Twitter. Oh wait, one more reason, I need to read more YA.

JEN: I think it makes sense to talk about the idea of friendship in this book. The whole book really centers around doing something for a friend. In the beginning, when Nick is in his feverish state, his friend, Scooter, saves him and is there for him. Then Jaycee takes Nick on an adventure to carry out a favor for Scooter. It’s interesting how Nick explains that he really hasn’t been as close with Scooter lately. Scooter’s disease makes it hard to go to school and because of how Scooter’s body is changed by the disease, Nick kind of distances himself from Scooter. Looking back at friends throughout my life, friends definitely come and go. There are some friends I have had all my life who know me so well and there are others who I thought I would be friends with forever but who I haven’t talked to in ages. And, of course, I so know those friends who I stopped being friends with because our interests changed or our lives just led us in different directions. Nick seems kind of shallow for not hanging out as much with Scooter but at the same time I kind of see where he’s coming from. It is hard to stay friends when people are both in different places in life. Is it right, no, but I can see how it happens.

COLBY: I think Scooter is awesome. He totally understands Nick not being the best friend, and he doesn’t hold it against him at all. In fact, up until the end he is looking out for Nick.

I think that sometimes we expect kids to be wonderful at friendship early in life, and that probably isn’t fair. I think about all the things going in Nick’s life: a dying friend, his seizures, a bit of a loser dad, and delayed puberty (you don’t get that in middle grade). Being a good fried to someone like Scooter probably wouldn’t be the easiest thing for 15 year old Colby if I were in Nick’s shoes.

JEN: It’s interesting that you talk about how Nick isn’t expected to be mature but Scooter totally has to be super mature and accept that Nick is feeble in his friendship to Scooter. I think that’s kind of a double standard...but then I think about my student who has pretty severe medical issues and she is super mature from being around her parents and doctors and nurses for a good deal of her life. She’s much more mature than kids her age in certain ways.

I think we are all learning about being friends and about being in relationships constantly. There are so many variables even when you think you are being the best friend you can be. Relationships are interesting. I think it’s hardest to make new friends and hang on to old friends. In Girl Scouts we used to sing the song about how a circle is round and that’s how long I want to be your friend. And then about making new friends but keeping old friends, too. It’s not always easy to make new friends without leaving old friends behind or making them feel bad that you are inviting new friends.

I totally love making new friends. I love meeting new people and developing friendships. I get excited and it’s almost a thrill for me to find someone new that I get along with. At the same time, I love my friends that I have. There are some great friends who I have known forever and who I know will always be there to support me no matter what. I am so glad I have all kinds of friends in my life.

I think Scooter and Nick are the kind of friends that have been friends for so long they just get each other. They like Star Wars and can joke about it and jump into a routine easily. I’m glad Nick gets the chance to hang out with Scooter more before he dies. How emotional were you when his lightsaber was in the casket with Scooter? That choked me up. I think I realized how much Nick really meant to Scooter. As much as we think of Scooter as being so mature and as if he doesn’t need Nick as a friend, he really did need him. Nick being there for him really did make a difference. I’m glad Nick wasn’t too late to realize it.

COLBY: I love that Scooter totally understands why Nick is the friend that he is. Sometimes as a reader I get all frustrated with character flaws.  I think about what a jerk the character is and how they should be this way or that way. When reading about Nick and Scooter’s relationship I tried really hard to look at it from Nick’s point of view. At 30, I think Nick is being shallow, but Colby at 15 wouldn’t have been as good of a friend that Nick is at 15. Gae didn’t write this book for me (I don’t think), so when I think about all the 15 year old kids out there reading this book, I get excited. Excited that they will have to go and look in the mirror after reading about Nick and think about the type of friend that they are.

JEN: John Green taught me a fancy word for character flaw, it’s awesome: hamartia. Isn’t that a great word? I love it. As much as characters make you mad in a book, everyone has some kind of character flaw. There’s no way we can all be perfect all the time...and I don’t think I would want to be perfect in every aspect of my life all the time because that just wouldn’t leave much room for fun, in my opinion. But books let us see a character’s hamartia and, like you said, it lets us hold ourselves up to a character in a book and either want to be more like that character, learn from that character, or decide to try not to be like that character at all. This is what I think books are all about. Letting us read along and learn about people and relationships and life in a safe way.

COLBY: Friendship is one of the hardest relationships we deal with in our lives. Marriage is held together by our vows and our family. Family is family, they are hard to get rid of. Friends are only our friends if we choose to keep them and feed that relationship. You can lose a friend in the blink of an eye, and there might not be anything that forces you to try to work out that relationship. Family doesn’t go away that easily. I think that it is imperative that kids get a chance to see how friendship works from books. I’m glad that Gae has given kids a story about what friendship in their world can look like.

JEN: You know what comes to mind when I think about what holds friends together? Those little necklaces where a heart that says “Best Friends” or “Friends Forever” is cut in half and one person gets a half and the other person gets a half. I know I shared one of those necklaces with a best friend or two when I was growing up. You’re right, it seems like just a said or unsaid promise to always be friends forever no matter what...and sometimes those promises are kept but sometimes they aren’t.
I do think it’s harder to maintain or develop friendships the older I get because I have a family; I can’t go hang out all the time or get together at the drop of a hat...and even getting together with kids can be hectic. I’m glad there are books about being a good friend for teens because it’s important to develop those relationships that hopefully will last for a long time when you are young. I’m glad Nick and Jaycee are friends first, too. There are so many books where people meet and are instantly madly in love (and I enjoy those books) but this seems so much more realistic...but we can save their relationship for another discussion!