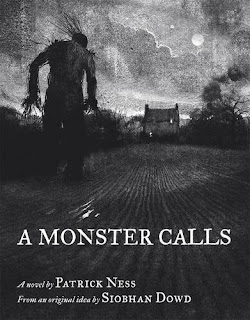 It has been an amazing month talking about A Monster Calls by Patrick Ness. I feel like I learned so much from reading it again because I was able to think about the whole book. It's interesting how when you read a book again and you already know what's going to happen how it changes your perspective. Bravo, to rereading! If you want to go back and see my previous discussions with Colby you can find them here:  Part 1, Part 2, Part 3, Part 4. 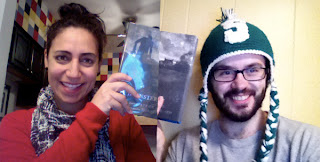 JEN: This is it! We get to talk about the end of A Monster Calls. I’ve so enjoyed talking about this book but I’m excited to get to the end because I really think this is where the book gets so good and so raw.

Colby, I know you know I have a great love for books with happy endings! I think because it’s more common for books to have happy endings, I kept thinking about Conor’s mom and what was going to happen to her but now that I look at the book as a whole, it’s so not about his mom. It’s all about him and his journey and his growth. This book is so deep. It’s such a close look at how we grieve.

This is the part where I started to feel sadder than ever for Conor because it’s like he can’t accept that his mom isn’t going to get better. He just refuses to believe it.

The monster’s third tale is told after the bully at school tells Conor he no longer sees him. Talk about mean! He takes Star from Hound Dog True to a totally different level. Can you imagine someone telling you they no longer see you any more, you are nothing to them, you are dead to them. I feel like this would crush anyone when it comes to developing identity or belongingness.

Finally he has to tell his story and his story is all about him being honest with himself and letting it be okay to accept that his mom will die. I just reread the end and I was thinking it might not affect me the same way it did the first time - that first them when I sobbed like crazy and just couldn’t stop - but it totally had me in tears again. Ugh, it’s so well-written I can’t even begin to explain it.

I know this is an insanely sad story but through my tears I could recognize my own relief for Conor that he was able to face his biggest fear. It’s not fair that he has to deal with his mom dying when he is so young but the monster does help him and it feels like things will be okay at the end. There is hope that Conor will be okay. Honestly, the dictionary should have this book listed as the pure definition of catharsis. What other book have you read that made you just release all your hurt and pain in such a sad comforting way?

While I was crying buckets of tears and grabbing tissues from the box left and right, my husband was worried about me but I had to just wave him off and tell him it was the best kind of cry.

COLBY: Jen, I do like happy endings. This book didn’t have a happy ending, but it had a hopeful ending. I’ve got no problem with that.

I think that Patrick did a good job preparing me for Conor’s mother’s death. At no point in the story did I feel like Conor’s mom was going to live. It felt sad, but not shocking out of left field sad.

I’m very curious to how kids feel about A Monster Calls. It feels like every adult loves the book. I have no idea how kids would feel about Conor’s story. I have some fourth graders that would be able to read it, but I’m not sure they would be ready for the content. I’m not thinking that I will put it in my classroom library. I do have a spot in my classroom that I keep books for older readers. Any time a former student drops by, I go to that spot and send them on their way with some books to read. I am looking forward to giving A Monster Calls to a certain seventh grade student. I think she will love it.