Dystopian vs. Post-Apocalyptic Week 2: Jo Treggiari Takes on the Zeitgeist

Last week we introduced our Dystopian vs. Post-Apocalyptic Saturday feature that will go through the end of March.  It will be filled will guest posts on the topic and what better way to start a discussion on post-apocalyptic vs. dystopian novels then to start with an author's perspective?!?!  Today we have the honor of having Jo Treggiari, the author of Ashes, Ashes, as a guest blogger. Before I share her post, why don't I tell you some about her.

Jo Treggiari was born in London, England but grew up in Canada, Roccasinibalda, Italy and California.She used to work in the music industry and eventually owned her own indie record label. The first CD the label ever put out was by a gangsta rap group. They also did alt rock and punk. She has trained as a boxer and could have been a contender. (Not really).

Jo started writing stories for my little sister when she was about 8. Often she would rework fairytales so that the princesses had a little more grit. Then she would write them out on white paper, roll them up and tie with a red ribbon. Later on in high school Jo penned personalized naughty limericks by request. She love dogs, crows, and octopi. She blogs. And she enjoys baking desserts.


Jo's first book, a middle-grade fantasy, The Curious Misadventures of Feltus Ovalton, came out in 2006. Her post-apocalyptic adventure, Ashes, Ashes, was published June 1, 2011 by Scholastic Press. She recently finished a punk rock YA- Fierce and is working on an urban fantasy, Briny Deep. 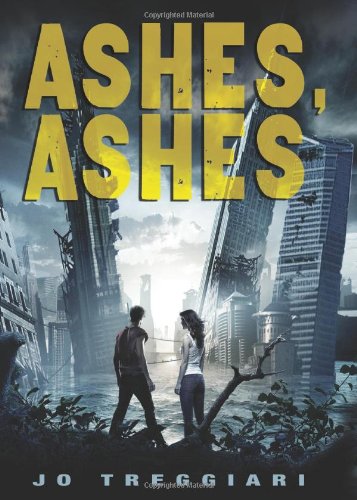 I was lucky enough to have the opportunity to read Ashes, Ashes for ALAN Picks.  Here is my review:


Publisher: Scholastic
Publication Date: June, 2011
Genre/Format: Science Fiction- Post Apocalyptic/Novel
Summary: Ashes, Ashes takes place in the not too distant future after a multitude of disasters have happened. Not only did global warming cause floods, droughts and other drastic weather changes, but a small pox epidemic killed off all of the human race between the ages of 30 and 60 as well as most of everyone else too. But Lucy survived. She is the only one left in her family and is doing her best to make it on her own living off the land in central park. Everything changes, though, when she meets Aidan from a close by camp and finds out that survivors are being hunted. Though Lucy struggles with being able to communicate since she's been alone for so long, Aidan and her find a connection and Lucy finds herself trusting him. From this point on, the action really starts and Lucy's life is truly on the line as well as other survivors.


What I Think: Ashes, Ashes is a truly realistic post-apocalyptic novel that takes you through a young lady's story of survival against horrible odds. The book will grab readers right away with Lucy's struggles, from finding food that is not contaminated to getting away from wild dogs trying to find their own food, as well as the human instincts that come when trying to survive either alone or with a group. One surprising aspect of the novel is the twist about half way through that takes this post-apocalyptic novel and transforms it into a dystopian one.

The Zeitgeist
When I first got the idea for Ashes, Ashes, I was spending my time between New York City and upstate New York, caught amidst the contrast of woodland and rolling pasture, and steel girders, concrete and glass. I called it the summer of the snapping turtle because it seemed I was constantly stopping the car to move them out of the road.

I remember how it felt to leave the city behind. Much as I loved it, there was a lightening around my heart whenever I passed the limits and headed out into the green. I could breathe. I had plans for a huge vegetable garden with zucchini for everyone. I was reading a survival diary at the time and I wanted to forage among the trees for edible mushrooms and ramps and loganberries. One of my oldest friends had been swept out to sea during the Indian Ocean tsunami and survived. All these ideas and experiences went into the stew of my mind and started to whirl around.

Ideas come as little seeds. Sometimes they fall on dry ground and nothing happens. Sometimes they turn into bigger ideas. And books. Sometimes being a new mother (for the 2nd time), stuck at home during an unseasonably hard and cold winter is the most fertile ground.

I wrote Ashes, Ashes in a big swooping frenzied rush, imagining the worst that could happen to my beloved New York City and the people who lived there after earthquake and flood, pandemic and drought. I wondered what would happen if technology failed and the wilds started creeping in and taking over. It was hardly a unique idea. I’d grown up on books like the Swiss Family Robinson, 1984, and My Side of the Mountain, and disaster movies like Escape from New York and Planet of the Apes, not to mention the real disasters in my lifetime- war, poverty, epidemic, greed, starvation, global warming, resource depletion, the nuclear threat, corruption.

And apparently I was not the only one ruminating on this sort of stuff. It might appear as if The Hunger Games trilogy came out and then presto, the next day there were a bunch of new post-apocalyptic and dystopian YA books on the shelves.
Because you know it was a super-trend. And a lot of us kid lit authors are psychic. ;)

In fact I was already working on Ashes, Ashes well before that. And knowing how long it takes to write a book and sell a book and publish a book, I think I can safely say that all us writers were knee-deep in our manuscripts way before this most recent love affair with all things nihilistic and hopeless began.
We tapped into something universally visceral and urgent because it was what we were thinking about.
It’s sort of like when the Ramones in NYC and the Clash in London both decided at the very same time to play short, fast songs filled with nihilism, outrage, and hopelessness. It’s the zeitgeist. And the same reason we wrote these books, is the same reason people like them. We are all worried about our future and we all express those anxieties and fears in our writing because it is cathartic and it helps us to make some kind of sense of it. And reading about the human spirit is cathartic too.

But here’s what’s really cool. Yes, it seems that there is a plethora of PA and Dystopian books but for the most part they are vastly different. You’ve got The Hunger Games, but you also have Enclave,  Ashes, and Legend, Ashfall, Carrie Ryan’s Forest of Hands and Teeth trilogy, Blood Red Road, Divergent, and Across the Universe, Matched and Delirium. Umm, and Ashes, Ashes. (Clearly using ‘Ash’ in your title is part of the zeitgeist too).


Some deal with a corrupt social order and the loss of individual freedoms. Some deal with the aftermath of the apocalypse. Some take a Sci-Fi approach. Some have zombies. Some explore survival and how humans rebuild or find new ways to live.


I’d say that along with the grim depiction of the world, the thing they all have in common is the fight. These are stories of helpless or powerless or beaten down or unprepared people deciding to fight.  And who out there, especially among the high-school aged readers, has not felt powerless?


It feels fresh. It feels acutely relevant. And although I talked about hopelessness and nihilism in the first section of this post, I don’t think any of these books would work without that spark of human ingenuity, that drive to survive, that ability that we have to try and fix things and make things right and re-imagine our future.


And I believe that’s what resonates with readers. Sure it’s sort of scarily fun to vicariously experience your worst nightmares. I mean, that’s why people go to the circus right? To see the trapeze artist fall or the lion tamer have his head bitten off.  So a New York City that has been crumbled into the earth is oddly comforting because as bad as things get with weird earthquakes and Armageddon snows (see how we love our disaster movie-themed lives!), it probably won’t get that bad. At least we don’t have zombies. Yet.

Jo hits it right on the head. It is through these novels of disaster, destruction and devastation that the readers find hope.  Thank you so much Jo for guest blogging for us and starting off the feature.  You can learn more about Jo at http://jotreggiari.com.

We will see you next week for another guest post,