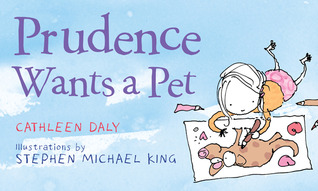 Title: Prudence Wants a Pet
Author: Cathleen Daly
Illustrator: Stephen Michael King
Publisher: Roaring Brook Press
Publication Date: June 2011
Genre/Format: Realistic Fiction/Picture Book
Summary: Dear, sweet Prudence really wants a pet but her parents aren't so keen on the idea. She adopts several "pets" - a branch, a shoe, a tire, her baby brother even - but will she ever find the right pet for her?
What I Think: I had so much fun reading this book with Peanut. It's a story that is funnier when you look at the pictures as you read. The story itself is great, but then looking at that words matched with the pictures had us giggling. I think it's a combination of the spacing out of the words and the pictures that show how things progress and Prudence's facial expressions. She's hysterical.

This book actually reminded me of Knufflebunny by Mo Willems because of the dad character. My favorite part in Knufflebunny is when Trixie is trying desperately to tell her daddy that they left Knufflebunny at the laundromat and the dad gets more and more frazzled until the page when he gets home and his wife opens the door and he is just so completely beside himself with frustration. I love that part. I think it's especially funny now that I'm a parent. When Prudence's dad trips over her pet branch and takes his anger out on poor branch, I was laughing out loud. I can just imagine the sound effects and the grumbling that would be going on. I'm not sure kids would make this connection but I do see how you could point out that both Trixie and Prudence try to communicate with their parents in different ways.


I especially love the message that Prudence sends to kids. Let's not get whiny when we don't get our way, let's get creative. Prudence takes matters into her own hands and even though she doesn't really find a pet that compares to a living, lovable, fluffy creature that she longs for, she does show her parents that she's serious about wanting a pet and that she has the potential to be responsible.


After I graduated from college, I really wanted a dog. I mean really wanted a dog. When I first got married, I even dragged my husband to see a dog that a friend was taking care of to be adopted and tried everything I could to bring that puppy home. I used to read books about dogs with students and together we would write persuasive letters - they wrote to their parents and I wrote to my husband - to try and convince them it would be great to have a dog. Maybe I went about this in the entirely wrong way and should try doing what Prudence does! It does give me an idea though, what if kids were prompted to adopt their own Prudence-type pet. They could choose from lots of random objects and then have to name it and describe it and give it a whole personality. How fun would that be? I think it would be great to talk about writing characters because kids will have to bring their own inanimate-object-pets to life!
Read Together: Pre-K - 12
Read Alone: K - 5
Read With: Knufflebunny by Mo Willems, I Wanna Iguana and I Wanna New Room by Karen Orloff
Snatch of Text:

Prudence gets a pet. It is a branch.
Its name is Branch.
Prudence drags it to school.
She drags it home again."
Reading Strategies to Practice: Activating Background Knowledge, Making Connections,
Writing Strategies to Practice: Persuasive, Descriptive, Narrative, Expository
Writing Prompts: Choose an in animate object to have as your own pet - name your pet, draw and label your pet's physical and character traits, and write what you like to do with your pet. Write a short story or poem about your pet or you and your pet. (And you can always ask kids to write a persuasive letter to their parents about why they should be allowed to have a pet of their own.)
Topics Covered: Family, Pets, Responsibility, Determination, Creativity