Here at Teach Mentor Texts we are always looking for more ways to support teachers! We've found that teachers seem to be constantly on the lookout for great nonfiction. We know we are! To help with this undying quest for outstanding non-fiction, we are excited to participate in Nonfiction Picture Book Wednesday hosted by Kid Lit Frenzy and The Nonfiction Detectives. Every Wednesday, you'll find a non-fiction review here - although it may not always be a picture book review. Please visit Kid Lit Frenzy and The Nonfiction Detectives to see what non-fiction others have to share, too.

Title: The 9/11 Report: A Graphic Adaptation
Author: Sid Jacobson
Illustrator: Ernie Colon
Publisher: Hill and Wang
Publication Date: August, 2006
Genre/Format: Non-fiction/Graphic Novel
Goodreads Summary: The 9/11 Report for Every American
On December 5, 2005, the 9/11 Commission issued its final report card on the government’s fulfillment of the recommendations issued in July 2004: one A, twelve Bs, nine Cs, twelve Ds, three Fs, and four incompletes. Here is stunning evidence that Sid Jacobson and Ernie Colón, with more than sixty years of experience in the comic-book industry between them, were right: far, far too few Americans have read, grasped, and demanded action on the Commission’s investigation into the events of that tragic day and the lessons America must learn.
Using every skill and storytelling method Jacobson and Colón have learned over the decades, they have produced the most accessible version of the 9/11 Report. Jacobson’s text frequently follows word for word the original report, faithfully captures its investigative thoroughness, and covers its entire scope, even including the Commission’s final report card. Colón’s stunning artwork powerfully conveys the facts, insights, and urgency of the original. Published on the fifth anniversary of the terrorist attacks on the United States, an event that has left no aspect of American foreign or domestic policy untouched, The 9/11 Report puts at every American’s fingertips the most defining event of the century.

What I Think: I am a pretty educated human being, or at least I try to be, but I remember that when 9/11 happened (I was a sophomore in college), I was completely shocked by what had happened. I cried and I saw many others cry in the days and weeks following this tragedy. And we are in Orlando, FL not being directly affected by the death and destruction. However, I think all Americans felt threatened by the attack that was so blatantly made to just kill and scare. And it worked.
Lots of questions were asked after the attack and as I tried to keep up with the news, between the impending war and the facts leading up to the attack, I was confused and conflicted. I don't think this confusion has ever subsided and I find myself crying whenever I read, watch or hear about 9/11 in any sort of depth. Many of the questions were answered in the 9/11 Report that was written by the National Commission on Terrorist Attacks Upon the United States, but at a lengthy 571 pages it was only through the media that many of us received any information. The problem is, that in our day and age, all media is bias in some respect. Every single outlet had to pick and choose what they were going to report out of this tremendously large book of findings. This meant that for many years a large majority of the public did not adequately understand the 9/11 Report. Hence the beauty of this graphic novel.

Sid Jacobson and Ernie Colon's graphic adaptation of the Final 9/11 Report takes all of this information, condenses it (but doesn't seem to eliminate) and lays it all out for us to see/read. It is endorsed by the 9/11 Commission and finally allows the 9/11 report to be shared with a much wider audience.

Read Together: Grades 5 and up
Read Alone: Grades 7 and up
Read With: I Survived the Attacks of September 11th, 2001 by Lauren Tarshis, Extremely Loud and Incredibly Close by Jonathan Safran Foer, Fireboat by Maira Kalman, 110 Stories by Ulrich Baer, 14 Cows for America by Carmen Agra Deedy, Love is the Higher Law by David Levithan, America is Under Attack by Don Brown, Non-fiction books about the 9/11 Attacks
Snatch of Text: 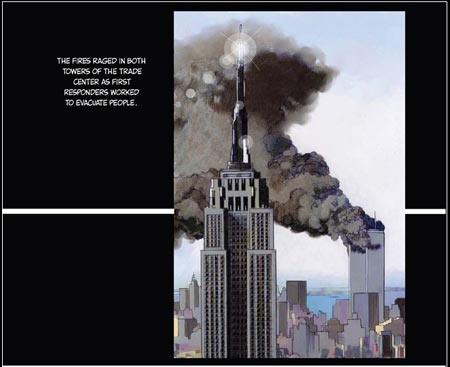