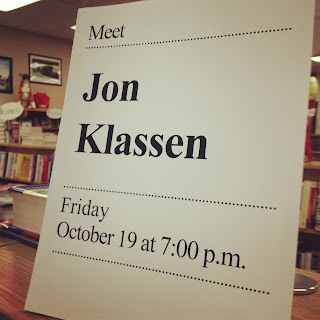 Last week I had the extreme pleasure of chatting with Jon Klassen before his book signing at Anderson's Bookshop in Naperville, Illinois. It was his first time in Chicago so we met for pizza at one of my favorite Chicago pizza places, Lou Malnati's. I had been brainstorming questions since I found out about the chance to meet with Jon, but there were just so many things I wanted to say that it was insanely difficult to flesh them out. We ended up talking about his books, a little bit about his process but a lot about how people seem to interpret I Want My Hat Back and This Is Not My Hat. Our conversation turned into yes another amazing discussion about these books that caused me to rethink and reprocess every other conversation I have had. Jon's books never cease to amaze me...just when I think I've heard every interpretation, there's more. 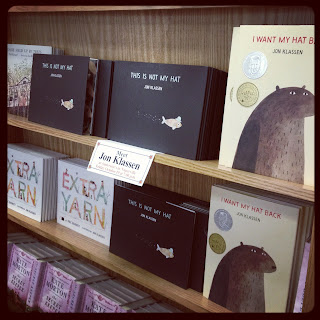 We started talking about writing picture books in general and he shared that once he has the idea, a picture book for him comes really fast. It may take a while for the idea to develop, but once it's clear, he can get the idea out in a couple of days.

Jon explained that when publishers initially read I Want My Hat Back, the were only interested in publishing it if the ending was changed. Luckily, Candlewick was happy with the book the way it was. When it came to Candlewick, they did want to talk about the ending but what they wanted to talk about was the fact that the rabbit would never make an appearance again. If he's eaten, he's eaten. Jon agreed and we have I Want My Hat Back. (Thank you, Candlewick!)

Jon was interviewed by several bloggers during the This Is Not My Hat blog tour. I loved reading all of their interviews. I was super excited when Travis from 100 Scope Notes asked him if the bear actually eats the rabbit in I Want My Hat Back and he said, "For sure and absolutely."

I asked Jon about the idea that while the rabbit is eaten, it might be just a fairy tale version of being eaten. Kind of like when the Big Bad Wolf eats Red Riding Hood and her granny but then we see them again when the woodman saves them. He said the rabbit is definitely eaten but the word eaten is definitely abstract according to him.

And then Franki from A Reading Year asked him if he would be #teamrabbit or #teambear and he responded that if he really had to choose it would be #teambear because, "as far as I can see, the rabbit does nothing redeeming."

In my review of This Is Not My Hat, I linked to all the other posts where I have talked about I Want My Hat Back. It's no secret that I'm #teamrabbit. When I saw Jon's response to Franki about the rabbit doing nothing redeeming, I knew that's what I really wanted to ask Jon about. I'm mainly team rabbit because the rabbit messes up but I don't think it's okay for the bear to go all bear on him because of it. Jon was super passionate about his feelings that while the rabbit's punishment for stealing the bear's hat may not have been fair, it didn't have to be. He explained that his books are not about an eye for an eye and that life isn't always fair. Sometimes the punishment will match the crime, sometimes there will be no punishment for a crime, and sometimes the punishment will be far worse than the crime. In the end, he contends it doesn't matter. What matters is that the story is there and that kids can and will read and understand what it's about. 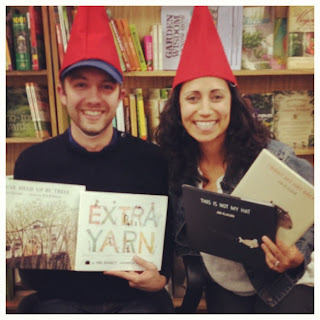 Jon was very sure that kids there was enough in the story for kids to be able to read and figure things out. He doesn't see I Want My Hat Back or This Is Not My Hat as the kind of books that have an explicit or didactic moral at the end. I don't see them as that either...I mean, clearly! For people like me who are happy with book endings that are wrapped in crisp paper and tied up with a bow, these two books might not be what you are looking for. But, I do like books that make me think and really stretch my brain and that's exactly what Jon's books do.

If you haven't read I Want My Hat Back...just don't even talk to me...go read it! Enough said. 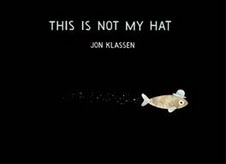 I can forgive you if you haven't read This Is Not My Hat yet since it was just published, but when you do you'll see how it's like I Want My Hat Back but different at the same time. Jon talked last week about how everything is completely flipped for this book. The book orientation and the colors. It's just awesome. The seaweed layout is my all-time most favoritist page in children's literature. Read it, I think you'll agree that it's completely briliant. It gave me chills. 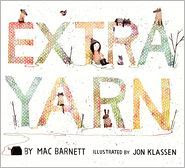 Extra Yarn is illustrated by Jon Klassen and written by Mac Barnett. It's a beautiful book but also a book that makes you think! I shared my fondness for Mr. Crabtree with Jon and he said Mr. Crabtree is his favorite character, too. Love. 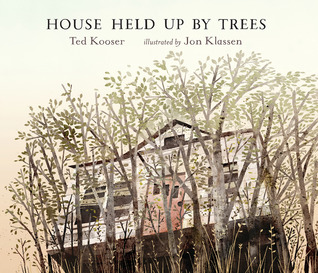 Last year, at NCTE, I read House Held Up By Trees by Ted Kooser and illustrated by Jon Klassen. Colby and I were at the booth talking about how much we love I Want My Hat Back, when I spotted this book on the shelf and recognized Jon's artwork immediately. This book is beautiful and the haunting illustrations match the text perfectly. Jon talked about how he used a red chair in the book to help show size and perspective and then talked about the time of day. He couldn't change seasons so he used the time of day to show change in time as the book progresses over several years.

Interviewing Jon Klassen and hearing speak about his books is a night I will not forget. I'm so looking forward to what he illustrates or writes next! Thank you to Candlewick for the interview opportunity and for a copy of This Is Not My Hat for us to give away! (Giveaway is now closed.) Hooray, Candlewick!