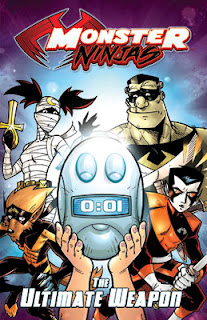 Last October, I interviewed Ryan Jacobson about his book Jack London's Call of the Wild: A Choose Your Path Book. Now Ryan, is working on a new project! It's called Monster Ninjas and is a kid-friendly webcomic. I am slowly dipping my toes into this world of comics. As a kid, I read Garfield and Archie comics but had never been into a comic book store. I took my son to Free Comic Book Day in May and then we were in Michigan this past weekend for Kids Read Comics. I get along much better with the graphic novels that I have read but I am starting to figure out little by little where to find good content for kids.


A webcomic is also known as an online comic or an Internet comic. Most webcomics are published exclusively on a website and readers read the comic as it is posted to the site. I love this when I think about kids who want to draw comics! What a great way for kids to draw and share their work with others. Lots of potential here! I have used Make Beliefs Comix for students to create their own comics to talk about what it might be like to be deaf or hard of hearing. It's a great tool for kids who aren't excited about drawing. 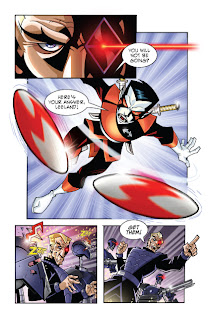 You can visit the Monster Ninjas' site to read this awesome kid-friendly comic for free! Kellee and I are also excited that Ryan has asked us to host a contest for one of our readers to be chosen to be drawn into the Monster Ninjas story as a zombie! How awesome is this?

Here's an example of how the author and illustrator have been zombified! 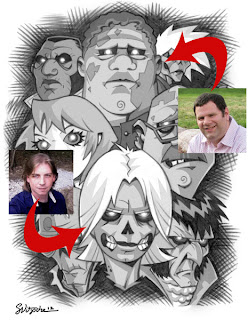 Pretty cool, right? I know you all want to be made into zombies! We're trying out a new giveaway form.
Enter your name and e-mail below and then you can do other things to earn extra entries!

Email ThisBlogThis!Share to TwitterShare to FacebookShare to Pinterest
Labels: Giveaway