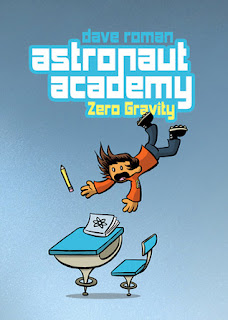 Title: Astronaut Academy: Zero Gravity
Author: Dave Roman
Illustrator: Dave Roman
Publisher: First Second
Publication Date: June 2011
Genre/Format: Science Fiction/Graphic Novel
GoodReads Summary: Hakata Soy's past life as the leader of a futuristic super team won't stay in the past!
The former space hero is doing his best to keep his head down at Astronaut Academy. Things aren't going so great, though. The most popular girl in school has it in for him. His best friend won't return his calls. And his new roommate is a complete jock who only cares about Fireball. Hakata just wants to make a fresh start. But how will he find time to study Anti-Gravity Gymnastics and Tactical Randomness when he's got a robot doppelganger on its way to kill him?
What I Think: Do you ever read a book that just completely blows your mind? Astronaut Academy completely blows my mind. I have been reading Jeff Anderson's 10 Things Every Writer Needs to Know. He share how teachers need to expose kids to books that are examples of different ways to unroll a story or even non-fiction text. Expose kids to these books and then stop and examine how the authors do it. It kept coming to mind as I read Astronaut Academy. Dave Roman uses the characters to drive his story. The book is told through little mini stories that focus on one character but over the course of the whole book, one story is told. It's not just giving each character a chapter, he makes each section into a character's comic almost but together they all work to tell a complex story. I love it and I love how it might stretch kids' brains to think of developing their own story this way.
Here's another reason Astronaut Academy completely blew my mind: it is so unique! I have been trying to think of books I can recommend to read with it but it's really really hard. To me, that tells it's a very unique book. As I was reading, I recognize the feelings and trying to navigate those from books like Smile and The Strange Case of Origami Yoda, the latter of which also switches from character to character but Astronaut Academy is in outer space! It's wild! Which made me think of Ender's Game but Ender's Game is intense in terms of the training and the fighting but lacks the feelings and emotions that teens go through (they are kids after all...). I even started making connections to Harry Potter because of all the characters, they are all at a school, Hakata has to face an enemy that comes after him, there's a girl with a time-stop watch who also has the power to throw fireballs...the point is, this book is awesome because it is so different and awesome but in the end is still about kids and experiences and feelings kids would have. This book is a great addition to any middle school or high school library!
Read Together: Grades 7 - 12
Read Alone: Grades 7 - 12
Read With: Smile and Drama by Raina Telgemeier, Teen Boat by Dave Roman and John Green, Missile Mouse (series) by Jake Parker, The Strange Case of Origami Yoda (series) by Tom Angleberger, Ender's Game by Orson Scott Card, Harry Potter (series) by JK Rowling
Snatch of Text:

Mentor Text For: Characterization, Form, Personal Narrative
Writing Prompts: Write about a time in your life when you and a friend had a misunderstanding.
Topics Covered: Friendship, Feelings/Emotions, Love, Space, Identity, Relationships, Attitude