Title: Maus I: My Father Bleeds History and Maus II: And Here My Troubles Began

GoodReads Summary: Acclaimed as a quiet triumph and a brutally moving work of art, the first volume of Art Spieglman's Maus introduced readers to Vladek Spiegleman, a Jewish survivor of Hitler's Europe, and his son, a cartoonist trying to come to terms with his father, his father's terrifying story, and history itself. Its form, the cartoon (the Nazis are cats, the Jews mice), succeeds perfectly in shocking us out of any lingering sense of familiararity with the events described, approaching, as it does, the unspeakable through the diminutive.
This second volume is subtitled And Here My Troubles Began. Genuinely tragic and comic by turns, it attains a complexity of theme and a precision of thought new to comics and rare in any medium.

What I Think: Maus shows the brilliance that can be within a graphic novel. This Pulitzer Prize-winning piece of literature not only is a great example of a graphic novel, but of writing in general. Art Spiegelman's story is multi-dimensional littered with symbolism, irony, and history.

One thing I found particularly intriguing about Maus is the way that Spiegelman made the setting a character within itself. The background was sometimes drawn more detailed than the characters leaving the characters to be generic looking and the background unique and with its own character.

I think this book would be a fascinating book to use in the classroom- history and reading/language arts. It would be a phenomenal book to teach simultaneously in the two classrooms.
Read Together: Grades 8 and up (though parts could be used in all grades, only certain parts are too mature for younger grades)
Read Alone: Grades 10 and up
Read With: Boy at War by Harry Mazer, Requiem: Poems of the Terezin Ghetto by Paul B. Janeczko, Berlin Boxing Club by Robert Sharenow, Once by Morris Gleitzman, Terezin: Voices from the Holocaust by Ruth Thomson, Parallel Journeys by Eleanor Ayer and Alfons Heck, The Book Thief by Markus Zusak
Snatch of Text: 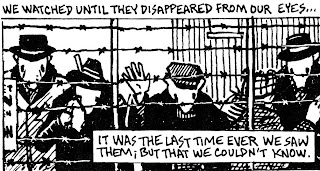 Mentor Text for: Symbolism, Metaphor, Interview, Flashbacks, Point of a View, Irony
Writing Prompts: Art Spiegelman interviews his father Vladek to get the story for Maus, after interviewing one of your parents, create a biography of your parent as either a comic strip or narrative.
Topics Covered: Cross-curricular- World War II, Holocaust, Concentration Camps, Nazis, Racism; Values, Morals, Survival, Self-Worth
I *heart* Maus I: