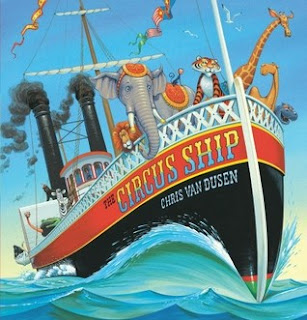 When a circus ship runs aground off the coast of Maine, the poor animals are left on their own to swim the chilly waters. Staggering onto a nearby island, they soon win over the wary townspeople with their kind, courageous ways. So well do the critters blend in that when the greedy circus owner returns to claim them, villagers of all species conspire to outsmart the bloated blowhard. With buoyant rhymes and brilliantly caricatured illustrations evoking the early nineteenth century, Chris Van Dusen presents a hugely entertaining tale about the bonds of community — and a rare hidden-pictures spread for eagle-eyed readers of all ages.
What I Think: I was drawn to this book because of the stunning cover. I didn't realize it was the same illustrator who does Kate DiCamillo's Mercy Watson series, but it makes sense because I love those illustrations as well. I love especially how the water is splashing up as the ship makes its way through the sea.
I was delighted that the story is every bit as wonderful as the cover. I love animals and its great to see a book where the animals in a circus - a circus run by a not-so-nice owner, too - get to escape their fate of circus-dom. The animals get to show how great they are and the villagers recognize this. My favorite page is when the circus owner comes to town after having tracked down the animals but they are no where to be found while, truthfully, they are right in front of his eyes. A great example of how it's important to pay attention to the illustrations as much as the text.
This book is also great for inferring the character traits of the circus owner. Van Dusen makes it pretty clear what we are supposed to think of the circus owner; he is very clearly a villain. A great chance to talk about story elements and plot in general. Love it!
Read Together: Grades 2 - 5
Read Alone: Grades 3 - 5
Read With: Heroes of the Surf by Elisa Carbone, Ollie the Purple Elephant by Jarrett Krosoczka, Library Lion by Michelle Knudsen
Snatch of Text:

"Through chilly water, all night long,
the animals swam on,
until they reached an island beach
just before the dawn.

They pulled themselves up on the shore -
bedraggled, cold, and beat -
then staggered to the village
on weary, wobbly feet."
Reading Strategies to Practice: Activating Background Knowledge, Making Connections, Making Inferences, Identifying Story Elements
Writing Strategies to Practice: Compare and Contrast, Poetry, Characterization
Writing Prompts: Write about what you were able to infer about the circus owner's character (character traits) and compare him to another character or person you know.
Topics Covered: Animals, Circus, Greed, Community, Helping Others, Peace