Thank you to Walden Pond Press
for sending me a copy of Posted to review
and for providing a copy of the book
for me to giveaway! (Details below!)

I'm thrilled to be part of the blog tour for John David Anderson's next novel: Posted! This is a must-read, must-share for middle school! 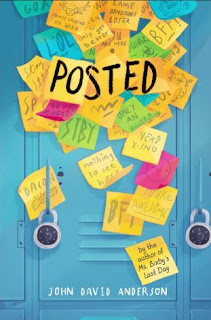 In middle school, words aren’t just words. They can be weapons. They can be gifts. The right words can win you friends or make you enemies. They can come back to haunt you. Sometimes they can change things forever.

When cell phones are banned at Branton Middle School, Frost and his friends Deedee, Wolf, and Bench come up with a new way to communicate: leaving sticky notes for each other all around the school. It catches on, and soon all the kids in school are leaving notes—though for every kind and friendly one, there is a cutting and cruel one as well.

In the middle of this, a new girl named Rose arrives at school and sits at Frost’s lunch table. Rose is not like anyone else at Branton Middle School, and it’s clear that the close circle of friends Frost has made for himself won’t easily hold another. As the sticky-note war escalates, and the pressure to choose sides mounts, Frost soon realizes that after this year, nothing will ever be the same.
What I Think: Oh, middle school. As I was reading Posted, I thought about Rebecca Stead's Goodbye Stranger and Geoff Herbach's Stupid Fast. Each of these books has a main character that learns about him or herself through navigating relationships with others. What I love about Posted is that the description puts you right into middle school again. It's just so specific but such an example of showing and not telling at the same time. 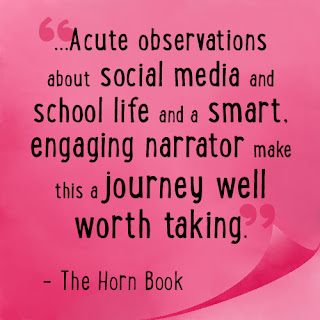 Credit: Sophia of Walden Media Tumblr
Last week, I was asked to conference with an 8th grade writer about a story he was working on in writer's workshop. I read through his piece and I realized he needed to know his character a little bit more so he could show his readers who this character really was and why we should want to go along on his story with him. This is something I think John David Anderson does so well. Each character has depth. He knows everything about the characters who impact Frost's story and he brings them to life. One of the snatches of text is an example of a super secret secret that Frost has. I asked my 8th grade writer friend what was the worst thing that ever happened to his main character and what was the best thing that ever happened to him. He wasn't sure. But as a writer, you have to be sure. You have to know what makes them tick. John David Anderson knows that Frost has his writing deep down in him but that it's nothing he wants anyone to know anything about.
The second snatch of text speaks to middle school and pretty much captures the experience of middle school. I'm sure students can relate and might even feel some solace to know they aren't alone. This snatch of a text would be a great to share and invite students to join in and write their own metaphor about middle school but then continue to describe it. 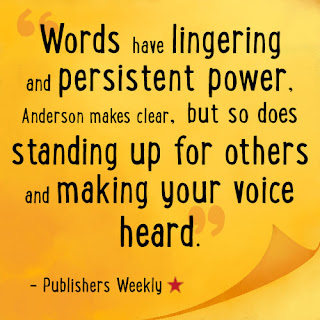 Credit: Sophia of Walden Media Tumblr
Snatch of Text: "Some things are better kept to yourself. I don't share my poems with anyone. Not even Bench or Wolf or DeeDee. Not because I'm afraid of what they would think. I mean, we play Dungeons & Dragons. It's hard to be embarrassed when it's the four of us. I just prefer not to share. We all need something that's ours. A thing that we know absolutely about ourselves that others can only guess at.
One day, I think, when I'm good enough, I will pull the notebook from its hiding spot beneath the mattress and open it up for others to see." (p.72)

"Middle school is a minefield. Deciding who to like and not like and who to follow and who to ignore completely. Worrying that you're going to trip while walking down the hall and sprawl all over the floor like a beached starfish. Wondering if you should raise your hand when the teacher asks a hard question and risk exposing your nerdiness for the sake of a few bonus points. Taking every sideways glance as a message, trying to crack the code. Every day you're bound to do something that gets you noticed by the wrong people. Every day you're bound to step somewhere you shouldn't." (p. 99)
Writing Prompt: Choose a time in the book when Frost is thinking about what it means to be a friend and explain how you relate to Frost or describe what he is learning about friendship.

And don't forget to enter the giveaway for your chance to win!
a Rafflecopter giveaway