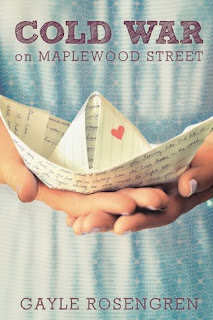 Title: Cold War On Maplewood Street
Author: Gayle Rosengren
Publisher: G.P. Putnam's Sons Books for Young Readers
Publication Date: August 4th, 2015
Genre/Format: Historical Fiction/Novel
GoodReads Summary: Cold War anxieties play out in a sensitively told story set during the Cuban missile crisis in the 1960s, perfect for fans of Gary Schmidt and Kristin Levine.
Joanna can’t get over how her brother broke his promise to never leave like their dad did. Sam is thousands of miles away on a navy ship, and no matter how often he sends letters, Joanna refuses to write back. When she makes a promise, she keeps it.But then President Kennedy comes on TV with frightening news about Soviet missiles in Cuba—and that’s where Sam’s heading. Suddenly Joanna’s worries about being home alone, building up the courage to talk to a cute boy, and not being allowed to go to the first boy-girl party in her grade don’t seem so important. Maybe sometimes there are good reasons to break a promise.The tense timeline of the Cuban missile crisis unfolds alongside a powerful, and ultimately hopeful, story about what it means to grow up in a world full of uncertainty.
What I Think: I'm such a fan of historical fiction but I especially love how this book takes place during a period of time that I hadn't read much about before. When it comes to U.S. History, it always seemed like we never made it very far past the Civil Rights movement. Readers will relate to Joanna, the people in her life, and the struggles she grapples with but the setting helps make this book unique.
As a mentor text, I would ask students to look think about how Gayle Rosengren brings Joanna's world to life. They can look at their own world and realistic fiction though the lens of Joanna's story. It would be great to compare and contrast between her description of the world and our world now and think about to describe it for others.
Read Together: Grades 4 - 6
Read Alone: Grades 4 - 6
Read With: Lost In The Sun by Lisa Graff, Rain Reign by Ann M. Martin, The Battle of Darcy Lane by Tara Altebrando, Wednesday Wars by Gary D. Schmidt
Snatch of Text:
"Just before she started down the steps to their apartment, a crawly feeling on the back of her neck made Joanna look up. Mrs. Strenge stood at the window. Her beady eyes stared from a scrawny face surrounded by hair sticking out in all directions, like the Bride of Frankenstein. Her fat black cat glowered down from the windowsill beside her." (p. 10)

"'She's an artist,' Uncle Zach pointed out. 'Artists have vivid imaginations.'
'Mom's not an artist anymore,' Pamela chipped in, tossing her last fork in the general direction of a plate and pulling Joanna along with her to the couch. 'She hasn't painted in weeks.'
Uncle Zach shook his head at her. 'Whether she paints or not, your mother is still an artist,' he said firmly. 'She sees and feels things differently than we do. More deeply.'" (p. 83)
Writing Prompts: Write about a time in your life when you were mad at someone. How did you handle your anger? What resolved the situation?
Topics Covered: Family, Friendship, Courage, Honesty, Siblings

*Thanks to Penguin Young Readers Group for
a copy of this title in exchange for an honest review!*
Posted by Jen Vincent at August 30, 2015