Eric the Boy Who Lost His Gravity 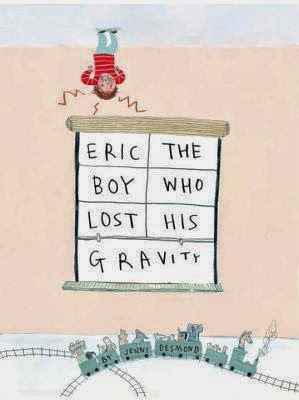 Title: Eric the Boy Who Lost His Gravity
Author: Jenni Desmond
Illustrator: Jenni Desmond
Publisher: Blue Apple Books
Publication Date: March 11th, 2014
Genre/Format: Realistic Fiction
GoodReads Summary: We've all seen kids who kick and scream and lose their cool. But when Eric loses his temper over his annoying little sister Alice, he floats up to the ceiling! And so we have a fresh and funny twist on temper tantrums created by star-on-the-rise Jenni Desmond. Eric, The Boy Who Lost His Gravity, with an amusing story and expressive painterly art, captures a spot-on understanding of how children feel when they get out of control and how they need help to pull themselves together - or, as in Eric's case, back to the ground. There will always be annoying brothers and sisters and things one wants, but can't have. This book gives children and parents an entertaining way to gain perspective and talk about these issues. For all of them, Eric offers a wise, witty, and uplifting tale that kids won't want to put down
What I Think: I live with a four-year-old. I live with a seven-year-old. I also live with a thirty-two-year-old. Sometimes my four-, seven-, and even my thirty-two-year-old get angry. It's hard to live together and not get cranky at some point or another. Eric in Eric the Boy Who Lost His Gravity is closest in age to my four-year-old and he has a little sister who has a tendency to make him angry, as innocent as she is. I really enjoyed this book for thinking about how we feel when we get angry and talking through some of those emotions. It seems like I do a lot of calming down of situations with my kiddos. Little Bean and I are often talking about making good choices and I have to remind him (a lot) that he can't always have his way. He identified a lot with Eric in this book.
As a mentor text, I really like how this books can help kiddos think about their feelings and think about how to handle feelings that seem to take over. It's great to have a book where kids can explore these feelings through a character and when they (hopefully) aren't experiencing those feelings at that time. I would use this book to talk to readers about making connections because I'm guessing they have felt like Eric at some point in their lives. From here, students can write about a time when they were mad and how they handled it. Maybe they didn't manage their anger very well and now they can reflect on how they acted and what the might do differently. They might come up with a situation that could easily turn into a seed idea in their writer's notebook.
I can also see using this book as a mentor text with older readers to look at dialogue and voice. The snatch of text I pulled shows three characters talking: Eric, his little sister Alice and his dad. You can hear Alice's sweet words telling Eric that her bunny wants to play with him, you can hear the short angry words from Eric and then you can even hear the tone in Dad's voice. Without even knowing the story, you can easily hear how each character would say these words. It would be great to ask students to read the words aloud and to add inflection in their voices so that they tell their message with their tone as much as with the words they are speaking. This is a great way to practice fluency but also voice and to look at how dialogue fits into a story. Dialogue is powerful in story. It helps the reader see how different perspectives and it does help to build a reader's understanding of different characters. Dialogue is a great way to bring characters to life. I love how the snatch of text can be used in isolation or during or after reading the whole picture book to look at how dialogue helps to capture character voice.
Read Together: Grades Pre-K - 2
Read Alone: Grades K - 2
Read With: Chloe Instead by Micah Player, Bink and Gollie by Kate DiCamillo and Alison McGhee, My Many Colored Days by Dr. Seuss
Snatch of Text:

"'Bunny wants to play, too,' said Alice.
'Get that bunny off my train,' said Eric.
'Eric, play nicely, please.' called his dad."
Writing Prompts: Write about a time when someone else made you really mad and how you handled your emotions and the situation. Would you handle your anger in the same way again or might you try responding in a different way the next time you get angry?
Topics Covered: Family, Anger, Frustration, Problem-Solving, Empathy