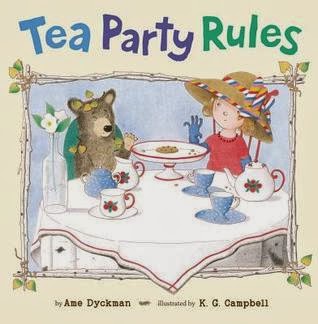 Title: Tea Party Rules
Author: Ame Dyckman
Illustrator: K. G. Campbell
Publisher: Viking Juvenile
Publication Date: October, 2013
Genre/Format: Fiction/Picture Book
GoodReads Summary: When he follows his nose through the woods, Cub discovers a backyard tea party…with cookies!  He is just about to dig in when the hostess of the tea party shows up. And she has several strong opinions on how Tea Party must be played. Cub tries to follow her rules . . . but just how much can one bear take, even for cookies?
A laugh-out-loud funny look at the required give-and-take of playtime,Tea Party Rules is an eventual friendship story that will delight grubby cubs, fancy girls, and cookie lovers everywhere.
What I Think: This book is so clever and sweet! I love that neither the little girl or Cub are looking for a friend but that they find each other. I also love that they spend so much time just getting ready to have the tea party. Isn't that so often what little kids do? They plan who will play which role, what's going to happen, where they need to go and what they need to wear and then they rarely or barely get to play I love how this story captures that element of childhood so well.
Right now, Peanut and Little Bean are at a super fun age where they can be the best of brothers one minute and furious at each other the next. Oftentimes, Little Bean decides to do something and Peanut thinks he's not doing it the right way but it ends up not being the "right way" according to Peanut more than anything else. We've had so many talks about how there doesn't have to be only one right way to do things and how as long as no one's getting hurt, it's probably okay. After reading this book, we talked about how it's okay to change the rules or to do something differently than according to plan. It was a great discussion and one that I think lots of kids might benefit from. Throughout the story, the little girl has a clear vision of what her tea party will be like but when Cub turns things upside down, she has to adjust. She could easily throw a tantrum and not have fun at her tea party but she decides - after some hesitation - to go with the flow and to choose fun over frustration. I love it!
Read Together: Grades K - 3
Read Alone: Grades K - 4
Read With: Goldilocks and Just One Bear by Leigh Hodgkinson, A Story for Bear by Haseley, A Kite Day by Will Hillenbrand, Chloe, Instead by Micah Player
Snatch of Text:

"Cub was playing in the woods
when he smelled something delicious.
He followed his nose through the
bushes and found...

cookies!
And another bear."
Reading Strategies to Practice: Activating Background Knowledge, Making Connections, Making Predictions
Writing Strategies to Practice: Expository, Personal Narrative
Writing Prompts: Explain the difference between rules you have to follow and rules that are okay to change, like tea party rules. How do you know when it's okay to change the rules? Write about a time in your life when you changed the rules and it was okay.
Topics Covered: Friendship, Determination, Imagination, Play