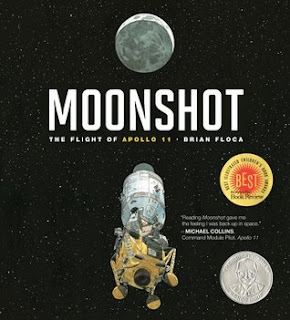 Title: Moonshot: The Flight of Apollo 11
Author: Brian Floca
Illustrator: Brian Floca
Publisher: Atheneum/Richard Jackson Books
Publication Date: April, 2009
Genre/Format: Non-Fiction/Picture Book
GoodReads Summary: Simply told, grandly shown, here is the flight of Apollo 11. Here for a new generation of readers and explorers are the steady astronauts, clicking themselves into gloves and helmets, strapping themselves into sideways seats. Here are their great machines in all their detail and monumentality, the ROAR of rockets, and the silence of the Moon. Here is a story of adventure and discovery -- a story of leaving and returning during the summer of 1969, and a story of home, seen whole, from far away.
What I Think: The fact that people have been and are in space is fascinating to me. It's easy to go through life (for me at least) and to not think about people being up in space. I love how this book pulled me back into what it might have felt like when we first sent people to the moon and then it reminded me of all the times I have heard about people in space. I'm sure there are so many stories about what people were doing when man first walked on the moon, where they were, the excitement around it. I was in kindergarten when the Challenger exploded. I remember we were all watching at school and were devastated when we watched it explode. When I got home, we were watching news and I remember them replaying it over and over again. Going into space is such an intriguing topic and Floca does a great job of capturing the excitement and suspense of the first time we visited the moon.
Floca uses several different literary devices and many of them repeat throughout the book, making Moonshot a great mentor text for descriptive elements of writing. By constructing sentences in a certain way, Floca sets the mood of the story, building the suspense and excitement right to the end.
Read Together: Grades 2 - 12
Read Alone: Grades 2 - 6
Read With: Shooting the Moon by Frances O'Roark Dowell, other non-fiction books about space
Snatch of Text:

"The astronauts squeeze in
to Columbia's sideways seats,
lying on their backs,
facing toward the sky -
Neil Armstrong on the left,
Michael Collins on the right,
Buzz Aldrin in the middle."
Reading Strategies to Practice: Activating Background Knowledge, Making Connections, Asking Questions
Writing Strategies to Practice: Descriptive, Onomatopoeia, Alliteration, Anaphora, Mood, Sentence Complexity
Writing Prompts: Write about what you think the astronauts might have been feeling during different parts of their adventure.
Topics Covered: Courage, Determination, Trailblazing, Integration - Science