Courage Has No Color 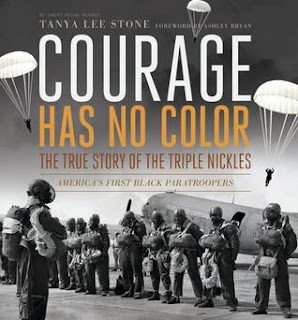 World War II is raging, and thousands of American soldiers are fighting overseas against the injustices brought on by Hitler. Back on the home front, the injustice of discrimination against African Americans plays out as much on Main Street as in the military. Enlisted black men are segregated from white soldiers and regularly relegated to service duties. At Fort Benning, Georgia, First Sergeant Walter Morris’s men serve as guards at The Parachute School, while the white soldiers prepare to be paratroopers. Morris knows that for his men to be treated like soldiers, they have to train and act like them, but would the military elite and politicians recognize the potential of these men as well as their passion for serving their country? Tanya Lee Stone examines the role of African Americans in the military through the history of the Triple Nickles, America’s first black paratroopers, who fought in a little-known attack on the American West by the Japanese. The 555th Parachute Infantry Battalion, in the words of Morris, "proved that the color of a man had nothing to do with his ability."
What I Think: I'm so glad that Tanya Lee Stone told the story of these African American who paved the way to integration in the military. I love how so many pieces of non-fiction lately in children's literature is about taking obscure or little known pieces of history and writing books that bring the stories to life. Non-fiction is so fascinating because it is part of our history. It really happened. Stories are so important but especially true stories of what people in distant or recent history accomplished.
While reading this book, I had to remind myself how the history brought to light in it is recent history. At the end, the author talks about a few of the men who were in the Triple Nickles and who were these first black paratroopers...and they are still alive today. This whole act of injustice was not that long ago. (Obviously, I know and understand this, but it's always a good reminder that it wasn't that long ago that our country looked very different in terms of racial prejudices and equities.) I think reminding students of this is so important because, to them, I think it will seem as though it was ages ago, when it might have been when their grandparents were young.
One thing that really struck home to me when reading this book was how black soldiers were received by citizens when they returned from service. My dad is a Vietnam veteran and I know how much it impacted him that when he returned from serving in Vietnam that many people were not supportive of the soldiers because of their disagreement with the war in general. It hurt him so badly to return and not be recognized for his experiences like soldiers have been in more recent wars. It is traumatic enough to experience war but to come home and not be celebrated and thanked makes the trauma of war even more intense. This resonated with me and made me feel even more for the men whose stories are shared in this book.
At the end of this book, Tanya Lee Stone discusses some of the process of her research and she does include pages and pages of citations and resources. This book is definitely an example of how primary texts can be incorporated and can be so important. As we move forward with the Common Core (in most states), and as we move towards students curating various non-fiction text and analyzing various non-fiction texts, I think this discussion about primary sources will be even more important. The Library of Congress has a phenomenal site where students can search for primary sources. Courage Has No Color is an example of how primary sources and quotes support non-fiction writing and a good mentor text to discuss when reading and writing non-fiction.
Read Together: Grades 5 - 12
Read Alone: Grades 5 - 12
Read With: 12 Rounds of Glory by Charles R. Smith, Jr. , Freedom Summer by Deborah Wiles, We Are the Ship by Kadir Nelson, other books about African-American history, other non-fiction books about less known stories such as Plant Hunters by Anita Silvey, Phineas Gage by John Fleischman, The Giant and How He Humbugged America by Jim Murphy, How They Croaked by Georgia Bragg
Snatch of Text:
"Most lack soldiers in World War II were kept out of combat. Instead, the military often assigned them to service duties such as building roads, driving trucks, sweeping up, unloading cargo, cooking, doing laundry, serving meals, or guarding facilities. Of course, there is honor in any of those jobs. But less so if the job ix forced upon a person, if ons it not offered other options. As one soldier put it., 'It is hard to identif one's self with fighting a war, when all one does is dig ditches.'" p. 8
"The U.S. military has a long history of racial prejudice, from the Revolutionary War, the Civil War, and right up through World War II. Despite the fact that African-American soliders had served the Army with distinction in World War I, there were outspoken and unfair criticsms sabou their abilities." p. 9
"'Why would a black man risk his life to help his country? The answer was simple. This is my country, this is my duty regardless of the social climate; regardless of the faults. This is my country, my children's country, and their children's. It is up to me and many, many people of all races and cultures to fight the haters and racists to make this a better place to live.'" p. 93
Mentor Text For: Activating Background Knowledge, Making Connections, Asking Questions, Non-Fiction, Expository, Quotations, Personal Narrative
Writing Prompts: Write about at time in your life that you did something because of the principal or a value that you believed in even when others weren't doing the same.
Topics Covered: Determination, Adversity, Prejudice, Injustice, Perseverance, Integration - History - World War II, War, Parachuting, Race