A President from Hawai'i 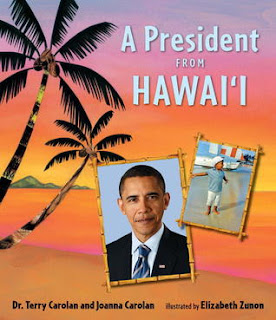 Barack Obama is the first United States President to be born in Hawai‘i, the Aloha State. A President from Hawai‘i — originally distributed exclusively in that state — explores the unique history and cultural traditions of President Obama’s birthplace. In addition to the well-known concept of aloha, it introduces such Hawaiian concepts as kokua (to help), lokahi (unity), and ohana (family), among others, and includes quotes from Barack Obama’s speeches, books, and interviews that reflect and embrace these themes.What I Think: I really love the vivid colors in this book. Zunon integrates several different types of media to make the illustrations really pop and to add lots of life and energy to every page of this book. I liked seeing pictures of Barack Obama worked in throughout and to read some very powerful quotes from him. I also really liked getting a feel for culture in Hawai'i. I just met a two people from Hawai'i at a conference recently so as I read, I tried to imagine them telling me about Hawai'i. The feel of the text reminded me of them actually.
One thing I would say that made it hard for me to love this book is that it seemed like there was a lack of clear focus. It seemed like the authors tried to write about Barack Obama but then took breaks throughout to instead tell about the culture and even the history of Hawai'i. Not to mention, there were many quotes from Barack Obama added in along the way. Overall, the information that is shared is interesting, but as a reader it was hard to follow the string of the story and to grasp the author's true message while reading. I can still see how it can be a resource for students, especially to introduce them to Hawai'i or to give them some background knowledge about Barack Obama that might not otherwise be expanded upon in other non-fiction texts.
I recently read Energize by Chris Lehman and he talks about authentic research for students. I also listened to Will Richardson talk about the abundance of information in today's world. Both of these made me realize how much we need to give students opportunities to read a variety of texts and also to interpret and analyze and curate through this information to find what they are looking for. I love that this book is beautiful and gives information. Readers and researchers can definitely use this as a resource for some information.
Read Together: Grades 2 - 5
Read Alone: Grades 2 - 5
Read With: Other non-fiction about Barack Obama or other presidents, other non-fiction about Hawai'i
Snatch of Text:

"'When I look back on my years in Hawaii, I realize how
truly lucky I was to have been raised there.'
-Barack Obama, Panahou Bulletin, fall 1999

PRESIDENT OBAMA was born in Hawai'i,
a first in America's history.
A kama'aina is a Hawai'i-born resident,
and Barack Obama is our first kama'aina president."
Reading Strategies to Practice: Activating Background Knowledge, Making Connections
Writing Strategies to Practice: Expository
Writing Prompts: Write about your culture, try to explain your culture to someone who has never experience it before.
Topics Covered: Integration - Social Studies, Geography, President, Culture, Determination, Family, Support, Hope, Respect