A Voice of Her Own 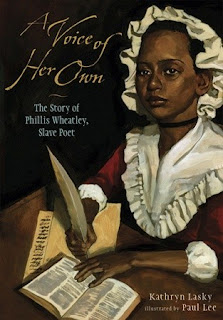 Title: A Voice of Her Own
Author: Kathryn Lasky
Illustrator: Paul Lee
Publisher: Candlewick Press
Publication Date: December, 2005
Genre/Format: Non-Fiction/Novel
GoodReads Summary: "Lasky shows not only the facts of Wheatley's life but also the pain of being an accomplished black woman in a segregated world." — BOOKLIST
"We’ll call her Phillis." In 1761, a young African girl was sold to the Wheatley family in Boston, who named her Phillis after the slave schooner that had carried her. Kidnapped from her home in Africa and shipped to America, she’d had everything taken from her - her family, her name, and her language.
But Phillis Wheatley was no ordinary young girl. She had a passion to learn, and the Wheatleys encouraged her, breaking with unwritten rule in New England to keep slaves illiterate. Amid the tumult of the Revolutionary War, Phillis Wheatley became a poet and ultimately had a book of verse published, establishing herself as the first African American woman poet this country had ever known. She also found what had been taken away from her and from slaves everywhere: a voice of her own.
What I Think: I enjoyed this book as much as I did A Voice of Her Own which I reviewed earlier in the week. I like that it's a biography novel chapter book that is not lengthy. Kathryn Lasky does a good job of capturing just enough of the main character's story. I can see how this book would pair so well with Chains by Laurie Halse Anderson and Copper Sun by Sharon Draper. I have read several of Sharon Draper's book but Copper Sun is my favorite. I have heard her speak twice and when she talked about writing Copper Sun she explained that as a writer she had to know everything about the true side of the story inside and out before she felt she had any kind of right to even think of writing anything. Her advice to writers was to write what you know, and if you don't feel that you know enough about a subject you are going to write about, then you need to immerse yourself into it so you learn enough to be able to write about it. She explained that she took ten years of doing research and visiting Africa to be able to write Copper Sun. I think she did an excellent job with the story. It would be great for a reader to read Copper Sun and then to read A Voice of Her Own and then compare the girls' stories.
Read Together: Grades 3 - 5
Read Alone: Grades 3 - 5
Read With: Other non-fiction by Kathryn Lasky, Dear America and My America series by Kathryn Lasky and others, American Girl books by various, Chains (series) Laurie Halse Anderson, Richard Write and the Library Card by William Miller, My People by Langston Hughes, Copper Sun by Sharon Draper
Snatch of Text:
"The girl would never see her mother again, but she would keep the picture of her mother, the sun, and the spilling water forever in her mind. She would treasure it as if it were the most precious jewel. She would also try to remember the palms, the gleaming calabashes, and the endless fields of elephant grass." p. 2
Mentor Text For: Making Connections, Making Inferences, Personal Narrative, Series, Commas
Writing Prompts: Write about a time in your life when someone believed in you and you succeeded. Write about a time in your life when someone didn't believe in you but you succeeded in spite of their doubts.
Topics Covered: Hope, Trust, Determination, Perseverance, Hard work, Grief - Loss