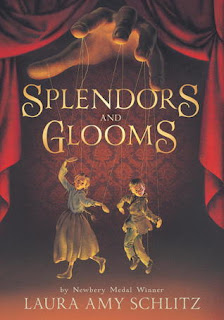 Title: Splendors and Glooms
Author: Laura Amy Schlitz
Publisher: Candlewick Press
Publication Date: August 2012
Genre/Format: Fantasy and Mystery/Novel
GoodReads Summary: The master puppeteer, Gaspare Grisini, is so expert at manipulating his stringed puppets that they appear alive. Clara Wintermute, the only child of a wealthy doctor, is spellbound by Grisini’s act and invites him to entertain at her birthday party. Seeing his chance to make a fortune, Grisini accepts and makes a splendidly gaudy entrance with caravan, puppets, and his two orphaned assistants.
Lizzie Rose and Parsefall are dazzled by the Wintermute home. Clara seems to have everything they lack — adoring parents, warmth, and plenty to eat. In fact, Clara’s life is shadowed by grief, guilt, and secrets. When Clara vanishes that night, suspicion of kidnapping falls upon the puppeteer and, by association, Lizzie Rose and Parsefall.
As they seek to puzzle out Clara’s whereabouts, Lizzie and Parse uncover Grisini’s criminal past and wake up to his evil intentions. Fleeing London, they find themselves caught in a trap set by Grisini’s ancient rival, a witch with a deadly inheritance to shed before it’s too late.
Newbery Medal winner Laura Amy Schlitz’s Victorian gothic is a rich banquet of dark comedy, scorching magic, and the brilliant and bewitching storytelling that is her trademark.

What I Think: There were so many things I liked about this book but so many things that were confusing or convenient. I'll start with the things I liked. Actually, I do love the writing and Laura Amy Schlitz' writing style. It's hard to criticize her writing at all to be honest. The words just seem to flow and she has a superb handle on characters. In both of the snatches of text that I shared, it seems like she is talking about one of the main characters, a girl named Lizzie Rose, but by the time you finish the excerpt, you'll realize that she's actually talking about other characters. These are both amazing examples of craft. She so expertly describes the characters without simply stating that they are both incredibly horrible people (for different reasons). I would count this as some of the best descriptive writing I have seen lately. This descriptive writing goes hand in hand with her character development. Through her descriptions, we get a clear image of the characters. There is clearly a distinction between the "good" characters and the "bad" characters (with the exception of Cassandra...but we'll get to that in a second).
The confusing parts for me were understanding more of the back story. I read a lot of books and there are definitely some books that start off by telling you some information but leaving you in the dark enough that you have to infer some things and you have to, or desperately want to, keep reading so you can put all the pieces together. I felt that way with this book. The book starts with Cassandra and knowing that she killed someone who could have told her the secret to undoing a spell/curse that surrounds a charm she wears on a necklace. It's insanely intriguing to want to read along to figure out if she is ever able to solve this, seeing as the man is dead. I'm a trusting reading. I trust that the author will tell me the whole story, or at least enough of the story, that I'll make sense of it in the end. So what do I do if I'm confused? I go back and reread to make sure I didn't miss anything that would have clarified for me. And then I continue on, faithful that it will come together and make sense in the end. I have to say that I was fairly confused still at the end of this book. Yes, I pieced a lot of it together but I still had so many questions about Cassandra and Grisini and their relationship and their talents and...a lot more.
Speaking of questions about Cassandra, I felt like it was hard to know if she was a good guy or a bad guy - and I know characters are more complex than good and bad, but I felt very muddy about her. She was overcome by wanting to solve the spell that bound her but at the same time she did some stuff that didn't seem very nice. I felt like I wanted a clearer picture of her and Grisini before to know what drove her now or to know that she was a good person at some point.
I went back and forth in deciding how I would rate this book. You have to believe me when I say the quality of the writing is absolutely superb. I loved reading about the kids and their story. What I struggled with was understanding how the adults in the story connected and truly grasping their back story. I initially gave this three hearts just because I was so confused still at the end but I could see how talking through the text with someone and trying to fill in the gaps yourself could bump it up to a four for me. Usually that happens with difficult texts, I read and then as I simmer and think more and talk with others I can appreciate how it could have a higher rating. I'd love to hear what others think compared to what I've shared!
Read Together: Grades 5 - 8
Read Alone: Grades 6 - 8
Read With: Liesl and Po by Lauren Oliver, Peter Nimble and His Fantastic Eyes by Jonathan Auxier
Snatch of Text:
"Lizzie Rose was hungry. As she pushed the puppet stage through the street, her nostrils drew in savory odors from the street vendors: roasted chestnuts, baked potatoes, and coffee. Her stomach growled, complaining that she had eaten nothing since breakfast. At noontime, Grisini had bought his usual sausage roll - she could smell the garlic on his breath - but he hadn't brought anything home. That was Grisini. Some days he came home with sausage rolls or meat pies and announced a feast, kissing his fingertips in praise of his own generosity. Other days, he crept off like a cat and slunk back satisfied, never bothering as to whether Parsefall or Lizzie Rose had anything to eat." (p. 14)

"Lizzie Rose sat by the fire, mending a torn shirt for Fitzmorris Pinchbeck. She sewed with her nostrils quivering and her mouth screwed up, pulling the thread so taut that the cloth nearly gave way. The shirt reeked of hair oil, and the seams under the arms were yellow with perspiration. Lizzie Rose almost shuddered as she stitched, and Ruby, who lay close beside her, had a worried look on her face.
The detested Mr. Pinchbeck had some two weeks early to celebrate Christmas, and there was no prospect of him leaving anytime soon. His grade was selling artificial teeth, but he had recently lost his place, and he found Grisini's old bedroom very comfortable. He would have liked the entire floor for his use, but when he said so, Mrs. Pinchbeck brandished a lace-edged handkerchief and swore that she could never, never ben so cruel as to turn helpless little orphelings into the street. Mr. Pinchbeck responded by saying that he hoped the little orphelings were grateful for his stepmother's charity. Every day, he thought of new ways for them to show their gratitude. Parsefall was to bring his shaving water, polish his boots, and run his errands. Lizzie Rose was to make his bed, tend his fires, and mend his clothes." (p. 160-161)
Mentor Text For: Making Inferences, Characters, Personal Narrative, Making Connections
Writing Prompts: Write about a time in your life when you did something you weren't supposed to do but you didn't get caught. How did you feel? Did you confess? How did your decisions impact others?
Topics Covered: Friendship, Family, Love, Determination, Courage, Independence, Magic, Trust, Revenge, Victorian Era
I *heart* It: