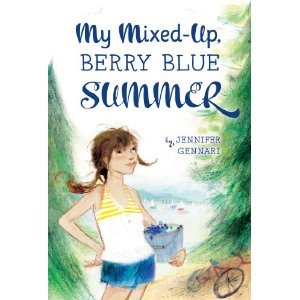 Author: Jennifer Gennari
Publisher: Houghton Mifflin Harcourt
Publication Date: May, 2012
Genre/Format: Realistic Fiction-LBGTQ/Novel
Goodreads Summary: Twelve-year-old June Farrell is sure of one thing—she’s great at making pies and she plans to prove it by winning a blue ribbon in the Champlain Valley Fair pie competition. But a backlash against Vermont’s civil union law threatens her family’s security and their business. Even when faced with bullying, June won’t give up on winning the blue ribbon; more importantly, she won’t give up on her family.
What Kellee Thinks: June Farrell is 12 years old and wants this summer to be perfect. She is going to spend her time with her best friend Luke, swimming and boating, and entering her delicious pies into the Champlain Valley Fair pie competition. But this summer was more than she bargained for. Everything changes for June when her mother's girlfriend Eva moves in with them and they decide to get married as Vermont has just passed civil unions.
My Mixed-Up Berry Blue Summer is a fresh early middle grade novel which deals tactfully with a relevant present topic that many children are dealing with but struggle with finding themselves in books. June will be a great addition to protagonists that they can connect with. I also find that although the book is pro-civil union, it never is preachy, it just shows how normal June's family is and the book is about June herself getting used to a change just as any child would when their mother is getting married and they will have a step-parent.
I also loved how food and the ocean were described throughout. June is a master pie maker and the way that pies and berries are talked about in the book are so full of gustatory imagery- YUM! June also lives on Lake Champlain and would rather live in her bathing suit on a boat or in the water than do anything else and the way the lake is described makes me want to join her.

What Jen Thinks: I definitely think of this book as a coming-of-age story. June learns a lot about herself and who she is during this mixed-up berry blue summer. When I think about a coming-of-age story, I think about a character who really grows up but at the same time learns how to be true to him or herself. June does just that. Her mom has a girlfriend and wants to get married now that civil unions are legal in Vermont. This puts June into a difficult situation when her best friend's family disagrees with this and when others in town do, too. June just wants to enjoy her summer and enter her pie into the pie contest but she ends up having to manage her relationship with her mother, her soon-to-be stepmom, her friends, other kids her age, and even people in town. It isn't easy but she ends up learning how to be true to herself and her own needs while realizing who are her true friends. She reminded me so much of  Marlee from Lions of Little Rock. Marlee faces a different kind of prejudice but has to learn to be strong and stand up for what she believes in, too.
Read Together: Grades 5 - 8
Read Alone: Grades 6 - 8
Read With: Pie by Sarah Weeks, Lola and the Boy Next Door by Stephanie Perkins, Lions of Little Rock by Kristin Levine
Snatch of Text: "Unlike some people, Lake Champlain was a friend I could count on. I knew her every mood - sometimes she was flat like a cookie sheet, and other times she was whipped up like meringue on a butterscotch pie." (p. 1)
"Then I smelled sweetness. Or maybe just the sight of the ripe blueberries made my mouth water. They were perfect - a foggy blue that turned purple blue when touched." (p. 96)

Mentor Text for: Imagery, Descriptive, Making Connections
Writing Prompts: Write about a time in your life when you stuck by a friend when others weren't kind to him or her.
Topics Covered: Civil Union, Pies, Friendship, Family, Courage, Loyalty
Jen and Kellee *heart* It: