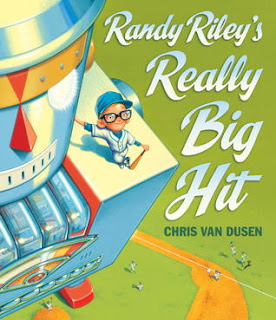 Title: Randy Riley's Really Big Hit
Author: Chris Van Dusen
Illustrator: Chris Van Dusen
Publisher: Candlewick
Publication Date: February 2012
Genre/Format: Science Fiction/Picture Book
GoodReads Summary: Randy Riley loves two things: science and baseball. When it comes to the solar system, the constellations, and all things robot, Randy is a genius. But on the baseball diamond? Not so much. He tries . . . but whiffs every time. Then, one night, Randy sees something shocking through his Space Boy telescope: it’s a fireball, and it’s headed right for his town! Randy does the math, summons all of his science smarts, and devises a plan that will save the day in a spectacular way. Once again, Chris Van Dusen winds up his visual humor, dizzying perspectives, perfect pacing, and rollicking rhyme and delivers a hit to make readers stand up and cheer.
What I Think: I am a huge fan of Chris Van Dusen. I recently reviewed The Circus Ship, I've read a couple of his Mr. Magee books AND he does the illustrations for Kate DiCamillo's Mercy Watson books. I love the style of his illustrations. They are colorful and have sharp lines and angles. This book looks like it is set in the 50's or 60's (to me at least...) based on the look Randy Riley's house. So he already had me at the illustrations but then he wrote the text in rhyme. And it's rhyme that works. I love rhyme when it is done right, if it's forced or just doesn't flow well, it drives me crazy but I think he hit his own home run when it comes to the rhyme in this text. And then...the content of the story is just so cute. Poor Randy, he's not that great at baseball and no one believes him when he tells them about what he saw through his telescope. Does he get discouraged? Nope. He gets to work. I love it.
I love characters who trust in themselves and demonstrate ingenuity and hard-work regardless of what is going on around them. Have I mentioned that there are robots in this book? Randy Riley loves robots. My Peanut also loves robots. He was excited when it came to the robot part!
One other part of this book that I loved as a parent are the parents reactions to Randy Riley when they realize he was right all along about what he saw in his telescope. It reminded me of the parents in Mo Willems's Knufflebunny. I love how the dad reacts to Trixie when she has her meltdown and I cracked up at Randy Riley's parents in this book. I had to stop and point out how the parents were drawn at this part and then Peanut and I were giggling. So funny. This is a great example of how illustrations work with text in a picture book. The illustrations add so much to the book especially at that part but there are other clues with in the illustrations throughout the entire story. Kids can take time to predict and infer as they read and look at the pictures.
Read Together: Grades K - 6
Read Alone: Grades 2 - 6
Read With: Down to the Sea with Mr. Magee (series) by Chris Van Dusen, Mercy Watson (series) by Kate DiCamillo, Knufflebunny by Mo Willems, Boy + Bot by Ame Dyckman, If I Had  Robot by Dan Yaccarino, Beep and Bah by James Burks, Robot Zombie Frankenstein by Annette Simon, One Cool Friend by Toni Buzzeo
Snatch of Text:

"He studied all the planets.
He memorized their tilt.
He researched how the thrusters
on the rocket ships were built.
He knew the constellations
and the light-years to the stars.
And wouldn't it be great, he thought,
to ride a bike on Mars?"
Reading Strategies to Practice: Background Knowledge, Making Connections, Making Predictions, Making Inferences
Writing Strategies to Practice: Personal Narrative
Writing Prompts: Write about a time in your life when someone didn't believe what you had to say.
Topics Covered: Integration - PE - Baseball, Self-Esteem, Hobbies/Passions, Family, Integration - Science - Robots, Integration - Science - Stars/Constellations/Solar System/Astronomy, Invention, Creativity, Ingenuity, Perseverance, Trust