Sky Boys: How They Built the Empire State Building 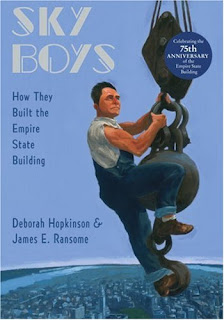 Title: Sky Boys: How They Built The Empire State Building
Author: Deborah Hopkinson
Illustrator: James E. Ransome
Publisher: Schwartz and Wade Books - Random House Kids
Publication Date: February 2006
Genre/Format: Non-fiction/Picture Book
Summary: A young boy tells of the excitement that surrounds the construction of the Empire State Building in 1931.
What I Think: I love learning about history in a fun way. It's amazing how easily we can go through our lives without thinking about how things came to be or how life was different for previous generations - and yet similar at the same time.

This book starts off on a somber note, as the reader is introduced to the main character who is living during the time of the Great Depression in Manhattan. The sad mood doesn't last long though because the boy notices the work being done to build the Empire State Building. The illustrations then depict different stages of the building being constructed until it stands as an emblem for the city.

I've never been to New York City but I did grow up in a suburb of Chicago. I loved going to the city to see the skyscrapers and still love going to this day. It's fun to imagine what it might have been like to witness the building of such a large building when no other building could compare to it and when so many people desperately needed something in their lives to give them hope.

While the history of the Ferris wheel was significant to me, the Empire State Building is a well-known national landmark. This book reminds us or teaches us of the people who built it and what it represents. It is written so eloquently that the text reads like poetry. I especially enjoyed the front and back papers that show actual photographs taken as the Empire State Building was built.
Read Together: 1 - 12
Read Alone: 3 - 12
Read With: All the Way to America by Dan Yaccarino, She's Wearing a Dead Bird on Her Head by Kathryn Lasky,  The Man Who Walked Between the Towers by Mordicai Gerstein nonfiction about the Great Depression or the Empire State Building or about construction
Snatch of Text:


“You drag your pop along to see, and
tell him what you’ve heard on the street.
‘Mr. Raskob wants to build the tallest skyscraper in the world,’ you say,
‘taller even than Mr. Chrysler’s building!
They say it’ll be done by next May.
Think they can build it that fast, Pop?’
‘Things are so bad, it seems
foolish to even try,’ he replies.
Then he sees your face and adds,
‘Course, you never know…’

“After a while the sun slips away;
tiny lights and stars flicker on.
Bright threads of taxis
lace the darkness below;
the great city shimmers and hums.”

"The steel is strong and new,
only eighty hours old,
barely cooled
from the fiery furnaces of Pittsburgh."

Reading Strategies to Practice: Activating Background Knowledge, Making Connections, Visualizing, Asking Questions, Recognizing Symbolism
Writing Strategies to Practice: Descriptive, Poetry, Alliteration, Personal Narrative, Symbolism
Writing Prompts: Think about a time in your life when you felt hopeless - who or what helped you begin to feel hopeful again?
Have students think of an object that is represents something important to them.

A symbol of hope

in the darkest of times.

A building,
clean and simple
and straight as a pencil.
And tall, so tall it will scrape the sky.
Topics Covered: Great Depression, Hope, Family, Symbolism, Determination, Poetry, Alliteration,