Bigger Than a Bread Box 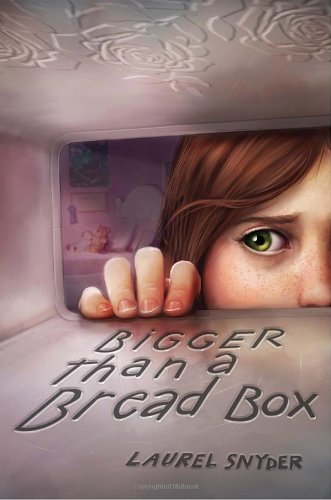 Title: Bigger than a Bread Box
Author: Laurel Snyder
Publisher: Random House Books for Young Readers
Publication Date: September, 2011
Genre/Format: Magical Realism/Novel
Summary: Rebecca is 12 years old and has noticed the tension growing between her parents.  But when her mom decides to suddenly move her and her brother Lew to Atlanta to stay with their Gran, Rebecca is shocked and devastated.  He doesn't know what to do without her best friend and is lost without her dad.  She may never be able to forgive her mother for this. Then, just as things seemed like they couldn't get any worse, Rebecca finds a magical bread box that delivers anything that she wishes for.  It seems too good to be happening.
What Kellee Thinks: I am not a big fan of magical realism, so I was worried when I began this book; however, I am happy to say that Laurel Snyder did just the right balance so that the realism didn't seem fake and the magic didn't seem far fetched.  This just shows me that if the magical realism is done well, I am a fan.  I love how Laurel used the magic element in this book.  It is such an original concept!

You can tell that Laurel Snyder put much of her heart into this book because emotions that grab at your heart flow throughout the entire novel. Rebecca is such a truthful representation of a middle school girl, specifically one who is going through a tough situation such as a parents separation and sudden move.
What Jen Thinks: I completely agree with Kellee! The emotions that Laurel Snyder was able to bring to life were so intense. I felt so strongly for Rebecca because Laurel helped me connect with her as a character and with her situation. I don't come from a family with divorced parents but I could sympathize with how it might feel so vividly. I think kids who deal with family issues like divorce could definitely relate to this book.

Who wouldn't love to find a magical bread box that delivers anything you wish for that can fit inside of a bread box? I can think of all sorts of things...but I love that Laurel also brings reality to this aspect of the story. Where are all these items coming from? It's such a great example of actions have consequences. Things don't just appear out of thin air, they have to come from somewhere. It's almost a lesson in coveting what others have and trying to be happy with what you have. What a timely message for Thanksgiving.

AND, Rebecca grows into such a strong character. Her parents are definitely caught up on their relationship - her mother especially - and, while she thinks she's doing what's best for the family, it really does end up being what's best for her. I love books with strong characters and strong female characters at that. Because the students I work with are deaf and hard of hearing, I am constantly talking to them about what they need to advocate for themselves - how to speak up and get what they need when their hearing loss gets in the way. Even though Rebecca doesn't have a hearing loss, she does stand up for herself and she can be a great role model to young readers.
Read Together: Grades 4 to 7
Read Alone: Grades 5 to 8
Read With: Tiger Eyes by Judy Blume, The Brilliant Fall of Gianna Z. and Sugar and Ice by Kate Messner, Five Flavors of Dumb by Antony John
Snatch of Text:

"Then he took his hands out of his pockets and bent over me, to hug me.  I put my arms around his chest.  He didn't make a sound, and there were not tears, but his body was shaking all around me, like a silent movie of someone crying.  Or maybe he was shivering in the wind.  He smelled a little like cigarette smoke and a lot like sweat.  My dad. My dad. My dad was so strong.  He never cried. "I don't know...," he whispered to me.  Answering a question I hadn't asked." (p. 13)

"In fact, it was a little like everything was a box.  Gran's house was a box, school was a box, Dad was a box, Mom was a box, and the magic was a box. None of them seemed to know each other or to be part of each other anymore.  My life was all in these little boxes, and I'd open one up and then close it again." (p. 89)
Mentor text for: Descriptive language, Characterization, Making connections
Writing Prompts: When Rebecca is taken from Baltimore to Atlanta she really misses her father and her best friend.  If you all of a sudden had to move, who would you miss here at home?; Rebecca tries to find the perfect present for her mother.  What is your perfect gift?
Topics Covered: Separation, Loneliness, Popularity, Family, Homesick