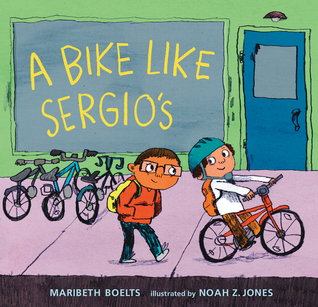 Title: A Bike Like Sergio's
Author: Maribeth Boelts
Illustrator: Noah Z. Jones
Publisher: Candlewick Press
Publication Date: October 4th, 2016
Genre/Format: Realistic Fiction/Picture Book
GoodReads Summary: Finders keepers, right? When Ruben picks up someone’s lost money, he finds out how hard it can be to do the right thing.
Ruben feels like he is the only kid without a bike. His friend Sergio reminds him that his birthday is coming, but Ruben knows that the kinds of birthday gifts he and Sergio receive are not the same. After all, when Ruben’s mom sends him to Sonny’s corner store for groceries, sometimes she doesn’t have enough money for everything on the list. So when Ruben sees a dollar bill fall out of someone’s purse, he picks it up and puts it in his pocket. But when he gets home, he discovers it’s not one dollar or even five or ten—it’s a hundred-dollar bill, more than enough for a new bike just like Sergio’s! But what about the crossed-off groceries? And what about the woman who lost her money? Presenting a relatable story told with subtlety and heart, the creative team behind Those Shoes pairs up again for a satisfying new picture book. What I Think: At the beginning of the school year, we spend a lot of time setting up notebook and talking about finding ideas for our writing. Oftentimes, we also focus on personal narratives. A Bike Like Sergio's is a great mentor text for thinking about personal narratives. Reading about Ruben and how he wants a bike just like Sergio's is something many kids might relate to. Wanting something so desperately is a pretty universal experience. I know for me, I wanted a puppy so badly for reeeeeally long time. And let me tell you, I could write all sorts of stories about that, even about the time when we almost adopted a puppy who would have been way too big for our little house. As a mentor text, you might look at the very first line and ask kids to free write from there. You might also look at the rest of the text and especially how Maribeth includes dialogue as part of the story. Including dialogue is something young writers need to learn how to do. They can pay attention to the dialogue and look at how to punctuate dialogue as well.
Snatch of Text:

"Every kid has a bike but me."
Writing Prompt: Write about a time in your life when you felt like something was unfair - maybe you felt like everyone had something (maybe a bike?) but you didn't. What did you do in that situation?
Additional Resources: Here's a Teachers Guide for A Bike Like Sergio's in case you are interested.