To Be Perfectly Honest 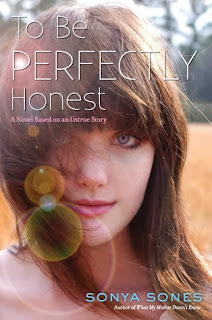 Title: To Be Perfectly Honest
Author: Sonya Sones
Publisher: Simon & Schuster Books for Young Readers
Publication Date: August, 2013
Genre/Format: Teen Issues/Novel In Verse
GoodReads Summary: Her friends
have a joke about her:How can you tell if Colette is lying?

Her mouth is open.Fifteen-year-old Colette is addicted to lying. Her shrink says this is because she’s got a very bad case of Daughter-of-a-famous-movie-star Disorder—so she lies to escape out from under her mother’s massive shadow. But Colette doesn’t see it that way. She says she lies because it’s the most fun she can have with her clothes on. Not that she’s had that much fun with her clothes off. At least not yet, anyway…When her mother drags her away from Hollywood to spend the entire summer on location in a boring little town in the middle of nowhere, Colette is less than thrilled. But then she meets a sexy biker named Connor. He’s older, gorgeous, funny, and totally into her. So what if she lies to him about her age, and about who her mother is? I mean, she has to keep her mother’s identity a secret from him. If he finds out who she really is, he’ll forget all about Colette, and start panting and drooling and asking her for her mother’s autograph. Just like everyone always does. But what Colette doesn’t know is that Connor is keeping a secret of his own…
What I Think: Oh, this book was just so fun. Colette has a wild imagination. It was fun to read this while I was listening to Anne of Green Gables. Anne has a boisterous imagination and Colette somehow seemed like an older version of Anne albeit super modern and openly aware of how her imagination easily gets carried away in her lies...and the story is sooooo different...but both girls definitely have great imaginations.
What I love about Sonya Sones and her writing in this book (and all of her books) is that she does a great job of capturing teenage emotions and making them just come to life on the pages. I so wish I had her books to read when I was in high school because she gets what teenagers might be dealing with and feeling. I have to say that I was starting to see how all of Colette's lies were going to come crashing down around her when Connor's secret was suddenly revealed. I think readers will totally enjoy Colette's story and how Connor comes into her life and has an impact on her. Ms. Sones does not disappoint and gives young adult readers another book to love.
Read Together: Grades 9 - 12
Read Alone: Grades 9 - 12
Read With: I Heart You, You Haunt Me by Lisa Schroeder, Crank, Tricks or others by Ellen Hopkins, Jumpstart the World by C. Ryan Hyde, Ten Things We Did (and Probably Shouldn't Have) by Sarah Mlynowski
Snatch of Text:

I never knew
that I could ignite.

I can't believe
what I've been missing -

I read this fantastic poetry collection last year and fell in love right away. On the very first day of this school year - via Zoom - I intr... 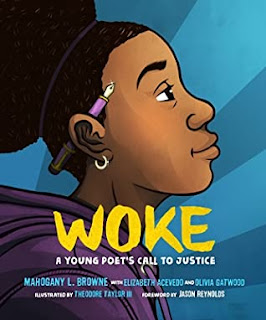