Today, Poetry Friday is hosted by Betsy at I Think In Poems.
Be sure to hop on over there and check out all the other Poetry Friday posts. Hooray Poetry! 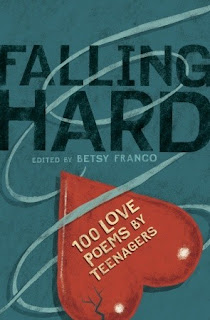 So many of the poems in Falling Hard are intense!
I enjoyed so many of them but this one was short, simple,
and had me cracking up so I just had to share.

I am
the flour
to your tortilla,
baby.

Just look at that! Isn't it marvelous? I think this would make students giggle but at the same time it's a great example of metaphor and using commas before, after, or surrounding a name. It reminds me of one of Betsy Snyder's poems from I Haiku You.

You be my jelly,
I'll be your peanut butter
Let's stick together!

There you have it, two fabulous examples of metaphors. And here's a bonus - you could even talk about the comma after "tortilla" in the first poem and why there isn't a comma after "you" in Betsy's haiku. Adding the comma to Bety's haiku completely changes the tone of the poem. It doesn't really change the meaning because the narrator is still talking to "you" but I still think students would be able to recognize the difference of how it sounds and feels with and without the comma.

I'm in love with these mentors texts today!