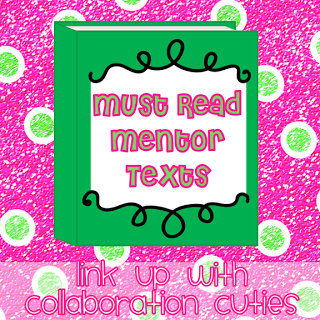 Each week Stacia and Amanda at Collaboration Cuties host a Must-Read Mentor Texts link-up. There is a different theme focus every week throughout the month and blogs can link up on Sundays. I'll be rotating through reviews of different mentor texts for language arts, math, science, and social studies. You can check out their blog for previous link-ups to connect with other mentor texts they have shared and other bloggers have reviewed, too. This week, we're talking mentor texts for science! 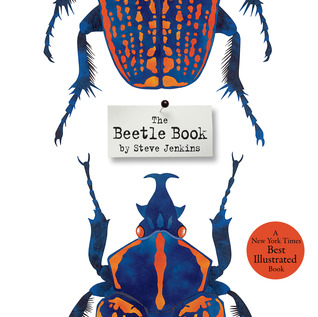 Title: The Beetle Book
Author: Steve Jenkins
Illustrator: Steve Jenkins
Publisher: HMH Books for Young Readers
Publication Date: April, 2012
Genre/Format: Non-Fiction/Picture Book
GoodReads Summary:
Beetles squeak and beetles glow.
Beetles stink, beetles sprint,
beetles walk on water.With legs, antennae, horns, beautiful shells, knobs, and other oddities—what’s not to like about beetles?The beetle world is vast: one out of every four living things on earth is a beetle.There are over 350,000 different species named so far and scientists suspect there may be as many as a million.From the goliath beetle that weighs one fourth of a pound to the nine inch long titan beetle, award-winning author-illustrator Steve Jenkins presents a fascinating array of these intriguing insects and the many amazing adaptations they have made to survive.
What I Think: As I read The Beetle Book, I had flashbacks to when I read Nic Bishop's Spiders. This book is page after pages of beetles and some cool but make-me-squirm facts. I tend to enjoy insects when they are in books but even reading about these insects has my skin crawling a bit. I have a definitely have a different appreciation for beetles as a species but I still would rather not encounter most of the beetles in this book.
What I do love about this book is that Steve Jenkins's artwork is as wonderful as always and he includes silhouette images of each beetle on a two-page layout so readers can see that actual size of the bugs he is talking about. (It's a relief when most of them are small...but some of them are pretty big!) There is a short introduction to the main idea being shared on each layout and then each bug featured has a short paragraph to describe how it relates to the main idea. We have a wonderful "living natural history museum" near to us called the Wildlife Discovery Center. Peanut has had his birthday party there for the last two years and it's a wonderful place where they have many different animals for the kids to meet and learn about. Oftentimes, they talk about frogs, toads, snakes, turtles, alligators, and lizards and their defense mechanisms. It's fascinating to hear about how each animal protects itself and how unique some of their defense mechanisms are. I loved the section in The Beetle Book about defense mechanisms. It made me realize how easily students can compare and contrast how animals defend themselves but also other aspects of their lives as well.
You know the fact books like the Guinness Book of World Records collections? It seems like most kids are fascinated by those books. They contain so many pictures and the pictures are usually wild or creepy that kids can't help but look at them. I think The Beetle Book has that same kind of allure but with a much more specific and academic focus. Kids will love learning about the beetles in this book!
Read Together: Grades K - 6
Read Alone: Grades K - 6
Read With: Spiders and other books by Nic Bishop, Beetle Bop by Denise Fleming, Actual Size and others by Steve Jenkins
Snatch of Text:

"The titan beetle is the world's longest
beetle. It jaws are powerful enough
to snap a pencil in half. This huge
insect lives in the Amazon rainforest." (p. 31)
Reading Strategies to Practice: Comparing and Contrasting, Using Non-Fiction Text Features, Author's Purpose
Writing Strategies to Practice: Compare and Contrast, Main Idea and Supporting Details, Similes, Metaphors, Expository
Writing Prompts: Animals may have similar or dissimilar habitats, eating habits, hunting habits, life cycles, or defense mechanisms. Compare and contrast one beetle to another beetle, or compare and contrast a beetle to another animal.
Topics Covered: Integration - Science, Beetles, Insects