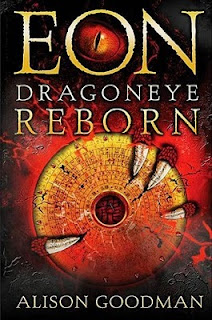 Title: Eon: Dragoneye Reborn
Author: Alison Goodman
Publisher: Puffin Canada
Publication Date: June, 2009
Genre/Format: Fantasy/Novel
GoodReads Summary: Eon has been studying the ancient art of Dragon Magic for four years, hoping he'll be able to apprentice to one of the twelve energy dragons of good fortune. But he also has a dark secret. He is actually Eona, a sixteen-year-old girl who has been living a dangerous lie for the chance to become a Dragon-eye, the human link to an energy dragon's power. It is forbidden for females to practice the Dragon Magic and, if discovered, Eon faces a terrible death. After a dazzling sword ceremony, Eon's affinity with the twelve dragons catapults him into the treacherous world of the Imperial court, where he makes a powerful enemy, Lord Ido. As tension builds and Eon's desperate lie comes to light, readers won't be able to stop turning the pages... Also Known As: Two Pearls of Wisdom, Eon: Rise of the Dragoneye, and Eon (All the same book just published with different publishers).
What I Think: I've only read a few books with dragons in them and I've loved them. I was excited that  in our spring book swap, Andrea Payan sent me a fantasy book with dragons. This book is definitely different from other dragon books I have read as it feels like ancient realistic fiction instead of fantasy but it is definitely fantasy. Eon, the main character, has studied ancient Dragon Magic in hopes of being chosen as the next Dragoneye. Basically, each year, a boy is chosen who communes with a dragon, gaining powers to control natural phenomenon and help the people. It's a super interesting story that becomes more complicated and intriguing when we discover Eon's secret and the extents to which Lord Ido, Eon's enemy, will go for the power he wants. I would recommend this book to older students who enjoy fantasy but also like action.
Read Together: Grades 7 - 9
Read Alone: Grades 7 - 12
Read With: Firelight (series) by Sophie Jordan, Eragon (series) by Christopher Paolini, The False Prince (series) by Jennifer Nielson
Snatch of Text:
"I squinted, trying to distinguish more detail against the bright glare of the ramp opening. He wore his oiled black hair in the double queue of the Dragoneye, looped high into a knot at the crown of his head. I caught the planes of his face as he moved, broad strokes painted by light and shadow: a high scholar's brow, a long nose like the foreign devils the emperor had allowed into the city, and a jutting dark beard. But it was the menacing power in his body that made the officials scatter before him. Lord Ido did not more like a Dragoneye. He moved like a warrior." (p. 75).
Mentor Text For: Characterization, Making Connections, Making Inferences, Visualizing
Writing Prompts: Write about a time in your life when did something to help
Topics Covered: Deceit, Trust, Loyalty, Honor, Determination, Wit, Courage