Title: Frankie and the Closet of Doom (2009)
Frankie and the Pine Run 3000 (2010)
Frankie and the Mathematical Menace (2011)
Author: Eric Wight
Illustrator: Eric Wight
Publisher: Simon Schuster Books for Young Readers
Publication Date: 2009, 2010, 2011
Genre/Format: Realistic Fiction/Chapter Book-Graphic Novel Hybrid
Summary: In Frankie Pickle and the Closet of Doom, Frankie loves his room messy and just doesn’t want to clean it up. His mom says it’s okay to leave it messy…as long as he’s prepared to deal with the consequences. Consequences?

In Frankie Pickle and the Mathematical Menace, Frankie’s brain goes blank when it’s time to take his math quiz. Even though he did the homework and studied, he just couldn’t take the quiz. Luckily, his teacher is giving him a second chance. Can Frankie get ready to take the quiz again and this time get a good score?
What I Think: I’ve heard people talking about Frankie Pickle all summer and now that I have read the books, I get what all the buzz is about. When I read these books, I instantly thought about Jon Scieszka’s devotion to writing books that appeal to boys because these books are totally geared towards boys. I think boys and girls will relate to this book, but I think boys especially will relate to Frankie’s hysterical daydreams. I’ve already both of these with my son and he can’t get enough of Frankie. I saw one of my 4th graders at the public library last week and showed him where to find Frankie Pickle. He checked out one of the Frankie Pickle books and the next day brought it to school. He was excited to tell me all about the book. He had devoured it in one night!!! I love it.


My favorite part about these books is the great job Wight does at developing Frankie as a character. He is a kiddo who likes to have fun and tries hard to do his best. Sometimes he realizes he needs help to get things done. Like I said, he is a daydreamer. The illustrations and the graphic novel that is infused in the books really makes it obvious when Frankie is daydreaming versus when he is experiencing something in real life. I’m not sure if I can think of other books that do such a great job of showing this. I love that this book makes it possible to so easily talk about what is happening with the character because of the chapter book – graphic novel combination.

In the snatch of text below from Frankie and the Closet of Doom, you can show students how easy it can be to introduce supporting characters while continuing with the story. I love how writer's can be sneaky and work description of characters in without having to stop the flow of the story. 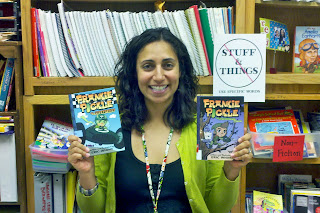 Read Together: Pre-K - 7
Read Alone: 2 - 7
Read With: Knuckleheads by Jon Scieszka, Skippyjon Jones by Judy Schachner, Big Nate by Lincoln Pierce, Justin Case: School, Drool and Other Daily Disasters, Alvin Ho: Allergic to Girls, School, and Other Scary Things by Lenore Look
Snatch of Text:
Frankie Pickle and the Closet of Doom
“Frankie reached across the breakfast table to claim his prize: a goldenly delicious waffle. The only problem was, someone else got it first.
‘Leggo, bro,’ said Frankie’s older sister Piper as she snatched the last waffle. Piper was the sporty one in the family: softball, soccer, tennis, field hockey – pretty much anything that involved hitting or kicking.
‘Lurgle burgle,’ said Frankie’s younger sister Lucy. Lucy was the diaper-waering one in the family. Her skills included eating, sleeping, burping, and being cute. She was an expert at all of them.” (p. 7-8)

Frankie Pickle and the Mathematical Menace
“Frankie turned and slowly approached Miss Gordon. His mouth was so dry, it felt like he had been snacking on cotton balls.” (p. 15)

“Nibbling on a peanut butter-marshmallow cookie, he cracked open his text book.” (p. 31)
Frankie Pickle and the Pine Run 3000
“Humphrey’s Hobby Shop was like a candy store for your brain.” p. 19


Reading Strategies to Practice: Activating Background Knowledge, Making Connections, Visualizing, Making Predictions
Writing Strategies to Practice: Personal Narrative
Writing Prompts: Think about a time when you didn't listen to what your parents asked you to do, how did things turn out? Did you change your mind about not doing what your parents suggested?  Think of a time when you wanted to do something by yourself but had to ask for help. Were things better when you asked for help?
Topics Covered: Family, Friends, Listening, Independence, Imagination, Perseverance, Hard-Work, Having Fun, Pets
Translated to Spanish: No