When Paul Met Artie: The Story of Simon & Garfunkel 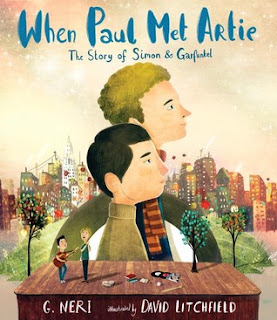 Title: When Paul Met Artie: The Story of Simon & Garfunkel
Author: G. Neri
Illustrator: David Litchfield
Publisher: Candlewick Press
Publication Date: March 20th, 2018
Genre/Format: Non-Fiction/Picture Book
GoodReads Summary: From childhood friendship to brief teenage stardom, from early failures to musical greatness — the incredible story of how Simon & Garfunkel became a cherished voice of their generation.
Long before they became one of the most beloved and successful duos of all time, Paul Simon and Art Garfunkel were just two kids growing up in Queens, New York — best friends who met in a sixth-grade production of Alice in Wonderland and bonded over girls, baseball, and rock ’n’ roll. As teens, they practiced singing into a tape recorder, building harmonies that blended their now-famous voices until they sounded just right. They wrote songs together, pursued big-time music producers, and dreamed of becoming stars, never imagining how far their music would take them. Against a backdrop of street-corner doo-wop gangs, the electrifying beginnings of rock ’n’ roll, and the rise of the counterculture folk music scene, G. Neri and David Litchfield chronicle the path that led two young boys from Queens to teenage stardom and back to obscurity, before finding their own true voices and captivating the world with their talent. Back matter includes an afterword, a discography, a bibliography, and a fascinating list of song influences.
What I Think: G. Neri completely captured the mood of Simon and Garfunkel and their music in this wonderful non-fiction picture book biography. I could hear their acoustic guitar and folk style music in my head as I read. By the end, I had tears in my eyes after learning more about Paul Simon and Art Garfunkel and their friendship. I had no idea they had been friends since they were young.
I love this book because it's such a great example of how an author and illustrator have created a book that characterizes their subjects so well. This book is a great mentor text for showing what mood is. I would think about word choice here and how it contributes to the mood. I would also use this as a jumping off point to talk about writing about a historical figure and how a writer can use word choice to set the mood for their piece based on what they know about the subject.
As a mentor text for ideas, you could read this book and think of your own favorite singers or musicians and think about writing about them and their story. Similarly, you could dive into music and different styles of music. Once I finished reading, I went and found Simon and Garfunkel singing The Sounds of Silence on YouTube. It instantly reminded me of what I know of the time period and wanting to go and learn more. I love books as opportunities to spark curiosity and inspiration for writing. Below is the video if you want to take a trip down memory lane or maybe you've never heard the song and are curious what these two are so very well known for.
Snatch of Text:

"When it's over,
Paul and Artie stand there,
breathless and grinning
at each other.
If nobody ever hears it,
at least they'll have a recording
just for themselves ---
a snapshot of their friendship,
frozen for all time." 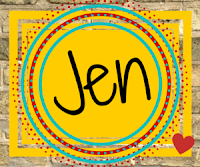