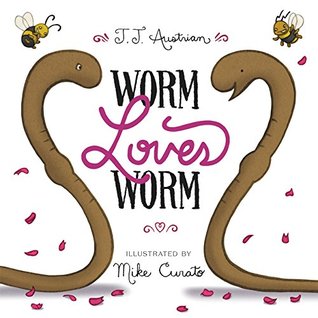 Title: Worm Loves Worm
Author: J. J. Austrian
Illustrator: Mike Curato
Publisher: Balzer + Bray
Publication Date: January 5th, 2016
Genre/Format: Fiction/Picture Book
GoodReads Summary: Perfect for fans of And Tango Makes Three and The Sissy Duckling, this irresistible picture book is a celebration of love in all its splendid forms from debut author J. J. Austrian and the acclaimed author-illustrator of Little Elliot, Big City, Mike Curato.
You are cordially invited to celebrate the wedding of a worm . . . and a worm.When a worm meets a special worm and they fall in love, you know what happens next: They get married! But their friends want to know—who will wear the dress? And who will wear the tux?
The answer is: It doesn't matter. Because Worm loves Worm.
What I Think: This book is super cute! Worms are fascinating little creatures and the perfect main characters for this book. I'll not soon forget the wonderful feeling I felt when so many people celebrated the Supreme Court's ruling for same sex marriage across the United States. It felt like it was long overdue. Now this book celebrates what's truly important when it comes to getting married - that love is what it's all about.
Worm Loves Worm is an absolutely perfect way to start a conversation with students about the danger of doing something simply because it's always been done that way. I like to think that the world grows and evolves with every generation as we start to think critically about what we do and why we do it...and more and more people stand up for what makes sense versus the way it has always been. Of course, this can apply to so much more than same sex marriage and that's why I absolutely love this book. It's a sweet story and one that even young children will understand and talk about (at their level of course). And if we don't start talking to kids about really thinking about their world and the decisions they make in it, we are doing them a disservice as much as ourselves.
As a mentor text, more than the discussion this book can foster, I would look at all the dialogue going on. Each character plays his or her own role in the story and his or her dialogue matches his or her personality. What each character says is very intentional and it's a good lesson in thinking about character development and their dialogue - what they would say, how they would say it, why they would say it. Additionally, this book would make a great reader's theater because of all the different parts and all the dialogue. I love reader's theater for practicing fluency.
Read Together: Grades K - 5
Read Alone: Grades K - 5
Read With: Be a Friend by Salina Yoon, Zombie In Love by Kelly DePucchio, Little Elliot, Big City by Mike Curato
Snatch of Text:

'Then we'll just change
how it's done,' says Worm.

'Yes,' says Worm."
Writing Prompts: Write about a time in your life when you had to rethink or relearn something you already thought you understood.
Topics Covered: Love, Humanity, Acceptance, Respect, Equality