Hero's Guide to Saving Your Kingdom 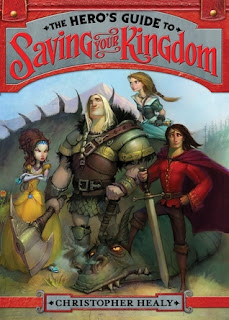 Title: The Hero's Guide to Saving Your Kingdom
Author: Christopher Healy
Illustrations: Todd Harris
Publisher: Walden Pond Press
Publication Date: May 1st, 2012
Genre/Format: Fantasy/Novel
GoodReads Summary: Enter a world where everything, even our classic fairy tales, is not at all what it seems.

Prince Liam. Prince Frederic. Prince Duncan. Prince Gustav. You've never head of them, have you? These are the princes who saved Sleeping Beauty, Cinderella, Snow White, and Rapunzel, respectively, and yet, thanks to those lousy bards who wrote the tales, you likely know them only as "Prince Charming." But all of this is about to change...
Rejected by their princesses and cast out of their castles, Liam, Frederic, Duncan, and Guztav stumble upon an evil plot that could endanger each of their kingdoms. Now it's up to them to triumph over their various shortcomings, take on trolls, bandits, dragons, witches, and other associated terrors to becom the heroes no one ever thought they could be.
What Jen Thinks: I love the spunky attitudes of these four princes. I remember reading Once Upon a Marigold and it's sequel and being so happy that the books acknowledged that "happily ever after" comes with some hiccups. Happily ever after sounds wonderful, but there are ups and downs in any marriage - especially when you throw kids into the mix. Anyway...the princes in this story find themselves in the not so ideal part of their happily ever afters. I love how Healy brings all of these characters to life. They are each so unique but at the same time so full of personality. I found myself laughing at the exchanges between the princes and in how they went about their adventure. The dialogue is great in this story. It really helps readers get an understanding of who each character is. I love the relationships that the princes develop with each other. This is a perfect mentor text for looking at characters and dialogue but also at how relationships can drive the plot. I dare you to read this and not laugh at the antics these princes get themselves into and out of while trying to save their kindgoms.
What Kellee Thinks:  I LOVE retellings of fairy tales and this one is no exception. And what is even better about this one is it is HILARIOUS! It reminds me a bit of Shrek except I liked the humor in Hero's Guide better because I feel it is a very smart funny. Just the concept is funny and smart- the four Princes Charming from the Snow White, Cinderella, Rapunzel and Sleeping Beauty stories star in this book (unlike the original stories where they don't even get credit with their real name!) and the Princes each have such a fun, unique personality.
While reading this, the teacher in me found many different parts that I could use- specifically when talking about point of views. I already use The True Story of the Three Little Pigs and the movie "Hoodwinked" to discuss it and Hero's Guide will be a perfect addition. I even found a part that made grammar funny!! And there is foreshadowing, a perfect plot arc, and suspense.
Read Together: Grades 4 - 9
Read Alone: Grades 4 - 9
Read With: Once Upon a Marigold (series) by Jean Ferris, We Are Not Eat By Yaks (series) by C.A. London, The True Story of the Three Little Pigs and The Frog Prince, Continued by Jon Sciezska, Knights' Tales (series) by Gerald Morris, Ella Enchanted by Gail Carson Levine, A Tale Dark and Grimm by Adam Gidwitz
Snatch of Text:

“Prince Charming is afraid of old ladies. Didn’t know that, did you?

Some of you may not even realize that there’s more than one Prince Charming. And that non of them are actually named Charming. No one is. Charming isn’t a name; it’s an adjective.

But don’t blame yourself for your lack of Prince Charming-based knowledge; blame the lazy bards. You see, back in the day, bards and minstrels were the world’s only real source of news. It was they who sculpted any hero’s (or villain’s) reputation. Whenever something big happened – a damsel was rescued, a dragon was slain, a curse was broken – the royal bards would write a song about it, and their wandering minstrels would perform that tune from land to land, spreading the story across multiple kingdoms. But the bards weren’t keen on details. They didn’t think it was important to include the names of the heroes who did all that damsel rescuing, dragon slaying, and curse breaking. They just called all those guys ‘Prince Charming.’” (p. 1-2)

“’We’ve slept in worse places,’ Gustav replied. ‘And you haven’t heard me complain once, have you?’
‘You complained when I wiped the gooseberries off your face,’ Frederic said.
‘That was an invasion of my personal space,’ Gustav retorted.
‘I’m sorry, but there was a huge lop of berries stuck to your cheek. Was I supposed to leave it there?’ Frederic said. ‘It was like that scene from Sir Bertram the Dainty and the Disheveled Duke where the duke had spinach stuck between his teeth and – ‘
‘I love Sir Bertram!’ Duncan gushed. ‘Did you read the one where he had to find those lost lobster bibs before all the dinner guests reached their second course?’
‘The Mystery of the Mystical Gravy Boat,’ Frederic gleefully confirmed. ‘That’s one of my favorites.’
Frederic and Duncan continued to jabber on excitedly about Sir Bertram. Neither of them had ever met another person who shared his wild enthusiasm for the dandy adventurer.
‘This is going to be a long night,’ Gustav groaned.” (p. 138-139)

The chapter titles are hysterical: “Prince Charming Defends Some Vegetables”, “Prince Charming Has No Idea What’s Going On”, “Prince Charming Should Not Be Left Unsupervised”.
Mentor Text For: Characterization, Dialogue, Plot Development, Suspense, Foreshadowing, Background Knowledge, Making Connections, Attention Grabber
Writing Prompts: You have to really know your character in order to write about that character. On a blank sheet of paper, draw and label everything you would find in your character's closet. Make a list of common phrases your character would say. Do this for another character and then write a scene where your two characters have a discussion.
Topics Covered: Fairy Tales, Fracture Fairy Tales, Adventure, Heroes, Princes, Princesses, Family, Friendship, Ambition, Dreams, Stereotypes

*Thank you to Walden Pond Press for sending us ARCs to review!*
Posted by Jen Vincent at May 04, 2012