Ranger In Time: Rescue on the Oregon Trail 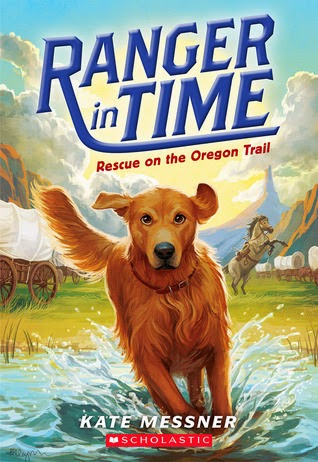 Title: Ranger in Time: Rescue on the Oregon Trail
Author: Kate Messner
Publisher: Scholastic Press
Publication Date: January 6th, 2015
Genre/Format: Mild Science Fiction/Novel
GoodReads Summary: Meet Ranger! He's a time-traveling golden retriever who has a nose for trouble . . . and always saves the day!
Ranger has been trained as a search-and-rescue dog, but can't officially pass the test because he's always getting distracted by squirrels during exercises. One day, he finds a mysterious first aid kit in the garden and is transported to the year 1850, where he meets a young boy named Sam Abbott. Sam's family is migrating west on the Oregon Trail, and soon after Ranger arrives he helps the boy save his little sister. Ranger thinks his job is done, but the Oregon Trail can be dangerous, and the Abbotts need Ranger's help more than they realize!
What I Think: First of all, this brought back memories of playing the computer game Oregon Trail when I was in elementary school. I loved that game. I think it might still be around...how fun that would be to connect this book with the game! I think part of what made the game so interesting was that anything could happen on the Oregon Trail. You had to pay attention to what you needed and how to make sure your family had enough food and water but they could still get sick and die of any number of things. I think the real life part of the game was fascinating. And the adventure mixed with the risk is also in Kate's book. Readers get to be right there with Sam on the Oregon Trail in Ranger in Time: Rescue on the Oregon Trail.
Kate does a great job of bringing the characters and the places to life, describing them with all the five senses throughout the book. Showing instead of telling is a great way to introduce descriptive writing with students. I know showing instead of telling is still something I think about often as I'm writing. Even though I understand it, I have to remind myself to put it into practice. Oftentimes reading a mentor text, visualizing what the author is describing, and drawing what you can imagine is a great way to see what details the author gave you. In a world where students are asked to provide evidence, students can draw and then go back into the text and find what the author wrote that prompted them to draw what they did. This is also an interesting way to look at inference because sometimes students infer and use the author's clues to visualize. Students might realize that even though the author didn't explicitly say something they drew, they can explain that they inferred it based on what they know and what clues the author gave them.
Next students can draw or use a picture as a writing tool as they try to describe with the five senses. To see if they were clear enough in their descriptions, they might ask a friend to read what they have written and see what how their drawing matches up.
Read Together: Grades 3 - 5
Read Alone: Grades 3 - 6
Read With: Time Warp Trio (series) by Jon Scieszka, Locomotive by Brian Floca
Snatch of Text:

"Sam stood up and sighed. He shoved a hand into his pocket and felt the folded-up friendship quilt squares his cousins had made. They hadn't finished in time to include them in the big quilt that Aunt Cecelia put together for their family, but they gave them to Sam anyway. He was glad. He liked having three small squares of home in his pocket. One had a picture of Scout, carefully outlined in thread. Another square showed the crooked apple tree by the fence. The third showed the Abbotts' farmhouse and barn, pieced together with colorful scraps of fabric. Sam already missed home so much.
Pa said it was all right to be sad. 'But your heart has room to love more than one place,' he'd promised." (p. 7)
Writing Prompts: Sam is setting out on a journey along the Oregon Trail with his family. He's sad to leave home but he has a quilt square to remind him of home. If you were leaving home for a long trip or for a long time, what three things would you bring with you or would you take a picture of to remember? Describe those three things and explain why they are important to you.
Topics Covered: Family, Friendship, Loyalty, Determination, Adventure, Integration - Social Studies