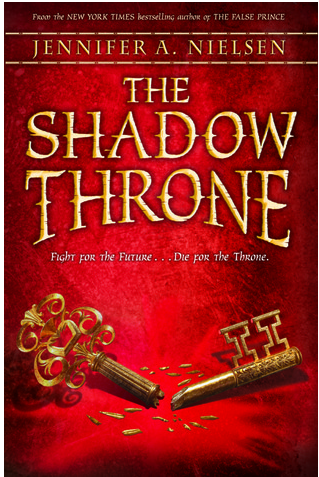 Title: The Shadow Throne
Author: Jennifer A. Nielsen
Publisher: Scholastic
Publication Date: February 25th, 2014
Genre/Format: Fantasy/Novel
GoodReads Summary: One war.
Too many deadly battles.
Can a king save his kingdom, when his own survival seems unlikely?War has come to Carthya. It knocks at every door and window in the land. And when Jaron learns that King Vargan of Avenia has kidnapped Imogen in a plot to bring Carthya to its knees, Jaron knows it is up to him to embark on a daring rescue mission. But everything that can go wrong does.His friends are flung far and wide across Carthya and its neighbouring lands. In a last-ditch effort to stave off what looks to be a devastating loss for the kingdom, Jaron undertakes what may be his last journey to save everything and everyone he loves. But even with his lightning-quick wit, Jaron cannot forestall the terrible danger that descends on him and his country. Along the way, will he lose what matters most? And in the end, who will sit on Carthya's throne?Rousing and affecting, Jaron's adventures have thrilled and moved readers in The False Prince and The Runaway King. Journey once again with the Ascendant King of Carthya, as New York Times bestselling author Jennifer A. Nielsen brings his story to a stunning conclusion withThe Shadow Throne.
What I Think: I have adored this series since the first page of The False Prince. I'm completely in love and in awe of Jennifer Nielsen's writing and masterful storytelling. Every word of the entire series is brilliant. As someone who is trudging her way through revisions of a novel, I'm amazed at how Jennifer is able to put all of these pieces together. There are twists and turns all over the place. All along, we know Jaron always has something up his sleeve but it still feels like there's no way he'll get out of all the situations he finds himself in. It's such a blast to follow along and see what he tries next.
Speaking of Jaron, the main character, he's definitely quite a character. He seems to always be the underdog but he seems to also thrive on being the underdog and working himself out of tricky situations. From The False Prince readers get a glimpse of what he is capable of but he definitely pulls out all the stops in The Shadow Throne. He's not the only unforgettable character in this series. All of the characters are so expertly crafted that I feel as though I know them. They seem real.
Along with developing charming and memorable characters, Nielsen makes the setting come to life. She helps readers imagine what it might be like to follow Jaron along on his antics but also to realize the feelings he deals with. In this book especially, she captures what it might be like to be amidst battles. Overall, this book is wonderful and it's a perfect ending to this series. I'm sad to leave these characters and Carthya but I'm glad to know they'll always be there. I'm such a fan of this series. Completely excellent to the last line.
Read Together: Grades 4 - 6
Read Alone: Grades 4 - 8
Read With: The False Prince and The Runaway King by Jennifer Nielsen, Finnikin of the Rock (series) by Melina Marchetta, Graceling, Fire, and Bitterblue by Kristin Cashore, Eragon (series) by Christopher Paolini, Inkheart (series) by Cornelia Funke
Snatch of Text:
"In my life, I'd had my share of fights, sometimes with fists, sometimes with knives, occasionally with a sword. I'd faced opponents twice my size, twice as mean, and, as a general rule, uglier than I ever hoped to be. But nothing had ever topped the ferocity of the argument now going on in the center of my great hall."(p. 1)
"Fink was an Avenian boy who returned with me from the pirates. He asked too many questions, paid attention to nothing for more than a few minutes, and seemed intent on crowding multiple sentences into each breath he took." (p. 16)
"As I drew closer, the clashing sounds of blades, the cries of the injured, and the odors of sweat and blood rushed at me in feral waves." (p. 34-35)
"'Nobody gives you respect in this life. You must take it, you must earn it, and you must hold it sacred, because no matter how hard respect is to attain, it can be lost in an instant." (p. 43)
Reading Strategies to Practice: Activating Background Knowledge, Making Inferences, Making Connections, Making Predictions, Visualizing
Writing Strategies to Practice: Personal Narrative, Commas (Series), Anaphora, Characterization, Repetition, Word Choice, $100 Words
Writing Prompts: Write about a time in your life when you were loyal to a friend or a friend was loyal to you. How did that impact your relationship?
Topics Covered: Determination, Wit, Perseverance, Loyalty, Friendship, Family, Love, Hope, Will, Trust, Belief