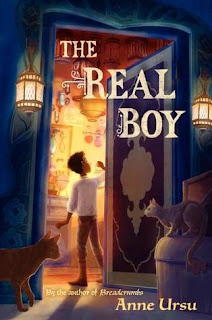 Title: The Real Boy
Author: Anne Ursu
Illustrator: Erin Mcguire
Publisher: Walden Pond Press
Publication Date: September 24th, 2013
Genre/Format: Fantasy/Novel
GoodReads Summary: From Anne Ursu, author of one of the most widely acclaimed and beloved middle grade novels in recent memory, comes a new fantasy adventure of magic, fear, and friendship.
On an island on the edge of an immense sea there is a city, a forest, and a boy. The city is called Asteri, a perfect city that was saved by the magic woven into its walls from a devastating plague that swept through the world over a hundred years before. The forest is called the Barrow, a vast wood of ancient trees that encircles the city and feeds the earth with magic. And the boy is called Oscar, a shop boy for the most powerful magician in the Barrow. Oscar spends his days in a small room in the dark cellar of his master's shop, grinding herbs and dreaming of the wizards who once lived on the island generations ago. Oscar's world is small, but he likes it that way. The real world is vast, strange, and unpredictable. And Oscar does not quite fit in it.But it's been a long time since anyone who could call himself a wizard walked the world, and now that world is changing. Children in the city are falling ill, and something sinister lurks in the forest. Oscar has long been content to stay in his small room in the cellar, comforted in the knowledge that the magic that flows from the trees will keep his island safe. Now, even magic may not be enough to save it. Anne Ursu, author of Breadcrumbs, has written another unforgettable story of transformation and belonging-a spellbinding tale of the way in which the power we all wield, great and small, lies in the choices we make.
What I Think: From the beginning of this book, readers are thrown into Oscar's magical world - although from the beginning there is something not quite right about the magic or the world or Oscar, this lonely boy who doesn't feel like he belongs. I'm a fan of fantasy books and enjoyed the unique world Anne Ursu brings to life in The Real Boy. As I look back on the story now, I think Anne took advantage of the world building as an author to divert our focus from Oscar. While I was so curious about Oscar's past, wondering where he came from and who his family was, I was completely shocked in a great way when everything came together. Or maybe all the mysteries throughout the book just come together, that they all play off of each other, not quite making sense, our brains pinballing around the story until finally, one click and it's like hitting the bonus and all the lights come on. I really enjoyed Oscar as a character and his desire to want to fit in and to want to understand people made me really want for him to find someone or something that made him feel connected. Even though this book is fantasy, that strong human emotion of someone who just wants to fit in and feel wanted was so real.
I definitely believe Anne does a great job with description. The snatch of text that I grabbed really shows how she describes Oscar's past...a past he doesn't remember. Even though he doesn't remember it and she doesn't really describe it, we can still visualize enough to know that it sounds like a dark or dangerous place and we can understand why Oscar might try to block it from his memory. This really stood out to me because there is something really awesome about describing something without ever really telling the reader what it is that's being described. Isn't that almost the exact definition of show don't tell? I think this would be a great snatch of text to share when talking about descriptive writing and show don't tell and a great prompt or challenge to ask them to try and do something similar in their own writing.
Read Together: Grades 4 - 6
Read Alone: Grades4 - 6
Read With: Breadcrumbs by Anne Ursu, Unwanteds by Lisa McMann, Fablehaven (series) by Brandon Mull, The Sixty Eight Rooms by Marianne Malone, 100 Cupboards by N.D. Wilson
Snatch of Text:
"Once, Oscar had lived in the Children's Home - across the plaguelands, across the river, on the eastern side of Aletheia where no magic lived. He did not remember much about the Home; whenever he tried to remember, his head filled with noise, some heavy pressing feeling, and flickering shadows that were the color of an old bruise. It was not a place he wanted to think too much about." (p. 21)
Reading Strategies to Practice: Making Inferences, Visualizing
Writing Strategies to Practice: Descriptive, Imagery
Writing Prompts: Similar to the snatch of text above, try describing something without actually defining it. Try to capture the mood or feeling of what you are describing without actually telling your reader about it.
Topics Covered: Friendship, Trust, Loyalty, Determination, Belonging