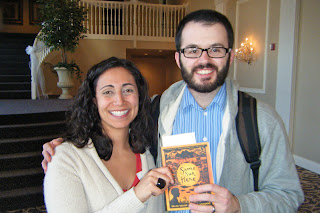 
COLBY: p. 145
“One time when I got a bad grade at school, Dadi told me how much it hurt that she was not able to go to school as a child. All her brothers were allowed to go but because she was a girl, her father said she didn’t need to learn. She went with her mother into the forest, and worked. She used to try to read her brother’s books, but she could not understand them.” -Meena

“Once when Dadi was pregnant with my uncle, a man cheated her out of 300 rupees. The man took her money and gave her a piece of paper. He said it was a prescription that would make her baby strong. But when she brought the paper to the pharmacy, they said it wasn’t real. All the paper said was, “This woman is stupid.” Dadi had kept the paper all those years and she showed it to me. She said she was cheated because she could not read or write. She said she did not want something like that to happen to me. I have never gotten a bad grade since she told me that.” -Meena

JEN: Both are great quotes...but the second one is the one I copied down. Ding ding ding ding! In one paragraph, Neela Vaswani made me feel like I had been punched in the stomach. How horrible is that man to take Dadi’s money? And then how horrible do you think Dadi felt when she found out she had been tricked? It reminds me of my spelling bee catastrophe. It’s just such a horrible feeling.

This story is a perfect example of why it’s important to tell stories. We need to hear what other people have been through. We need to know where we have come from and what we can do to make the world a better place. We need to learn from each other’s mistakes.

Meena also realizes never to take her education for granted. There are lots of kids today who take things for granted - lots of adults, too. I try to be thankful for everything I have, good or bad, every day. Even something like a messy kitchen - I’m lucky to have a kitchen with dishes and food that needs to be cleaned up.

COLBY: I really like learning/reading about moments in people’s lives that are turning points. Hearing this story was a turning point for Meena. I think reading a book like R.J. Palacio’s Wonder will cause many readers to think deeply about the way they view and treat others.

JEN: I agree. I can’t imagine someone reading Wonder and not being moved by the story. When I booktalked it to two classes last week and described Auggie, there were gasps and comments when I explained that he says he looks like ET or Darth Sidious. It was interesting how they reacted and I explained to them to remember that he is a real person and the same as them on the inside. I hope that after they read the book, they would think about how they respond to seeing someone like Auggie or anyone who is different.

COLBY: p. 189
“They were all surprised that we are best friends but we haven’t ever met. Ms. Beldsoe said that’s what happens when you find a ‘kindred spirit.’” -Meena

JEN: Right again! Sometimes, when I try to explain the relationships I have developed with people I have met through Twitter, people just don’t understand. One time, I explained that I felt I had found “like-minded” people on  Twitter...but the person I was talking to suggested that it’s better to spend time with people who don’t think like you and who stretch your thinking. So “like-minded” isn’t the word I really wanted. I really think I have found people who share a similar passion for books and literacy. I love Meena’s term - that I have found kindred spirits.

COLBY: I think that finding “like-minded” people on Twitter has helped push me as a reading teacher. My students benefit from the  conversations and relationships that I have because of Twitter.

JEN: I totally agree but I like Meen’a term better. I love that eveyone I know on Twitter has a different perspective on the books that I’m reading. Look at how different-minded we were about I Want My Hat Back but how we were able to talk about it and stretch our minds. I feel like I have found kindred spirits in Twitter friends. We share the same excitement and love of reading and writing and working with students but we are all unique at the same time.


COLBY: p. 206
“So then I thought about what it meant, to be watching something so historic. The first black person to become president. If he could overcome the odds, then so could a hillbilly, or an Indian, or anybody. And it made me feel like anything was possible. People are always saying how you can be anything you want in America, but I had never really believed it, or even thought that much about it. But when Obama was sworn in, I DID believe it. And I think that’s why everyone had those tears in their eyes, because they knew that, too. I’ll never forget that moment.” -River

I actually really liked the paragraph before this, too:

“Nobody said a word the entire time, but when Obama was sworn in, I heard someone let out a little weeping sound and I looked around and there was Dr. Patel. I hadn’t even known he was there. He had tears in his eyes. So then I looked at every single person and MOST of them had tears in their eyes. Mark’s mom kept her hand over her mouth like she was amazed. This little old woman sitting in a plastic waiting room chair beside me dotted a wad of Kleenex to her eyes. It was the strangest thing.” -River

Doesn’t it just seem like time is standing still? I love it. Do you remember where you were when President Obama was sworn in? I was teaching at one of my middle schools and the TVs were on in all the rooms. I got to watch it with a 7th grade class I had been working with.
COLBY: I was teaching fourth graders when Obama was sworn in. We watched it together as a class. I’m not sure many of them understood the significance, but I’m glad that they got an opportunity to watch it live.

JEN: One of my 3rd graders was reading a Guinness Book of World Records book and he found a page that had a picture of Obama being sworn in. The heading explained that he was the first African-American president. I’m glad our kids will grow up with the sense that it’s normal for an African-American person to be president. It’s interesting to already see how their perspective on things might be different just because of how times are different.

You are a rockstar at finding quotes! Overall, you are six for six. I love this book. What’s crazy is I don’t think we have given that much about the plot of the story away. This book is about Meena and River’s lives but also about friends and how we build relationships at the same time. Awesomeness.