Lorien Legacies: I am Number Four & The Power of Six

Title: I am Number Four
Author: Pittacus Lore
Publisher: HarperCollins Children's Books
Publication Date: August, 2010
Genre/Format: Sci-Fi/Novel
Summary: John Smith isn't an ordinary guy, he is the 4th in a group of 9 teenage aliens that must survive to save their race; however, there is a group of murderous aliens, the Mogs, after them. Since he is number 4 and the first 3 have been killed, John is next! But John is sick of moving and when Henri, his guardian, picks Paradise, OH as their next home, John wants to stay there. Then, when he finds a best friend and a beautiful girl friend, he is even more gung-ho on remaining in Paradise.
What I Think: Okay, I did not want to read this book. After hearing about James Frey's fiction factory (read more here) and all the deplorable aspects of what happened to make this novel exists, I had decided I was never going to read it. Then, a couple of weeks ago, ALAN asked me to review the sequel, so I felt that to do so well, I had to read the first book. So, I got it from the library and started reading and even though I did not want to like the book, I did. It was fun, action packed and well paced with characters that I enjoyed reading about. Now, I do not think it was very well written. It was written to be popular and be a movie and you could tell. But, you can't deny good plot development and characterization and I believe the book did have that. So, after reading I am Number Four, I wasn't so upset about reading The Power of Six, but I had different feelings about the sequel.
Read Alone: Grades 6 to 11 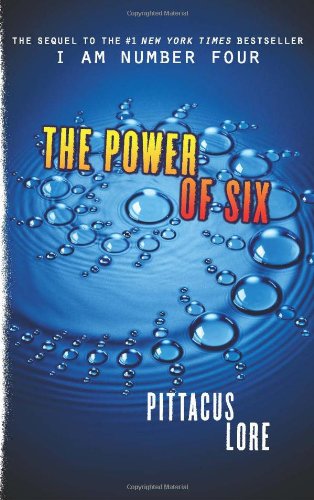 Title: The Power of Six
Author: Pittacus Lore
Publisher: HarperCollins Children's Books
Publication Date: August, 2011
Genre/Format: Sci-Fi/Novel
Summary *Spoilers for I am Number Four*: The Power of Six picks up directly after I am Number Four with 6, John, Sam and the shape-shifting Bernie Kosar on the run from the Mogs, a group of aliens who are trying to kill them. The Power of Six also gives us the point of view of number 7, Marina, as she tries to figure out her legacies. The points of view switch back and forth between the 3 friends on the run and Marina in Spain trying to figure out what she needs to do.
What I Think: I was pleasantly surprised with I am Number Four, but I feel like this book doesn't live up to the same expectations. The Power of Six tried too hard to make us understand what was going on and it felt like the story itself was forgotten. By adding Marina’s point of view it took away from the connection you felt with the characters in the first book. I did find her story interesting, but both stories in this book felt skeletal because they were switching back and forth. I will say, though, that many of the questions that I had after I am Number Four were answered in this book, but even more questions were posed leaving the sequel as a must-read to find the answers.
Read Alone: Grades 6 to 11